Google Gets Serious About Cardboard 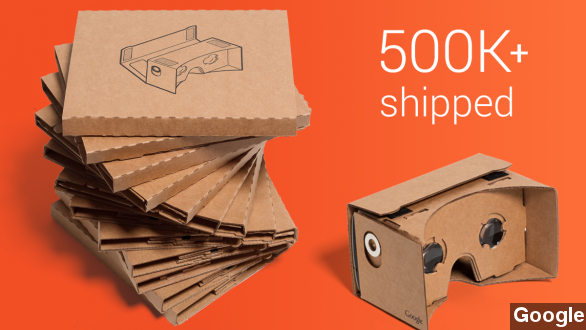 Cardboard is the next big thing in tech, at least according to Google. The company's silly-looking virtual reality viewer got a serious makeover this week.

You might remember Google Cardboard from Google's I/O Conference back in June. The low-tech headset, essentially a piece of folded cardboard and some lenses, turns an Android phone into a VR machine.

The effect works by breaking up a smartphone's landscape mode into two separate portrait screens, one for each eyeball. The Cardboard viewer holds the phone up to the lenses, magnifying each screen to create a 3D effect. (Video via Tested)

At the time, it looked like Google was just using Cardboard to take a playful jab at Facebook, which had just bought VR pioneer company Oculus VR for $2 billion. Your average Cardboard costs about $20-25, by the way.

But the little contraptions were a big hit with the tech crowd — Google reports over half a million units have been shipped through various third-party vendors. So the company looks to be doubling down on the project.

First, Google Cardboard now has its own corner of the Play store, featuring a selection of Cardboard-compatible apps and games. The most versatile app for now is probably Google's own Cardboard, which brings virtual reality to YouTube and Google Earth, among other things.

And there will probably be more apps on the way soon; Google's also releasing an official software development kit for Android and Unity, giving developers an easy baseline for making Cardboard-compatible apps.

This all makes Cardboard seem like a serious initiative from Google. But we can't help feeling like the company's still poking a bit of fun at the competition.

After all, Google's announcement comes right after Samsung started selling early versions of their Oculus-powered Gear VR headset, which transforms a Galaxy Note 4 smartphone into a virtual reality device. It's a lot like Cardboard, but more hi-tech, made of plastic and retailing at $200.

Speaking of Oculus, their smartphone-free VR headset is still far away from a consumer release, but the company's made some very interesting acquisitions this week. Nimble VR, who's been working on hand tracking and motion sensing VR tech, and 13th Lab, which works in augmented reality, have both been snapped up by Oculus.

Oh, and if you're looking for work on the cutting edge of cardboard-based technology, Google's currently hiring more staff for the project.