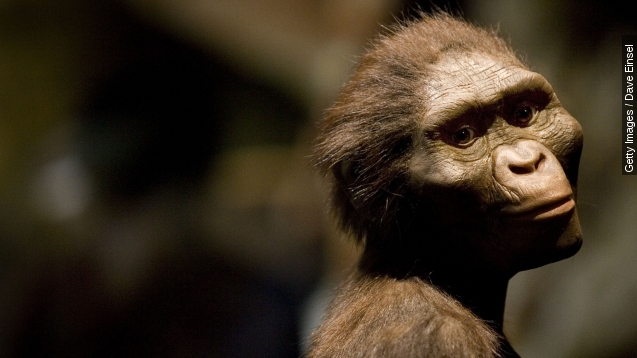 Google celebrated the 41st anniversary of the discovery of Lucy with a play on the "Ascent of Man" picture.

Lucy is the nickname given to the first skeleton of an Australopithecus afarensis ever discovered. The find helped scientists connect the dots between apes that walked on all fours and humans who walked upright.

Forty percent of the skeleton was intact when it was discovered in Ethiopia in 1974, which isn't bad considering it's about 3.2 million years old.

Scientists determined that Lucy walked upright by examining her knee structure and the curvature of her spine. (Video via California Academy of Sciences)

That's why Google's doodle shows Lucy, named after a Beatles song, walking upright between an ape and a human.

Lucy is currently in a safe at the National Museum of Ethiopia near where she was first unearthed. But the public can view only plaster replicas of the skeleton.