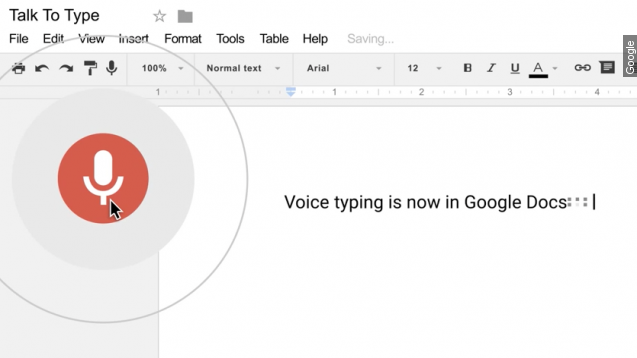 By Mikah Sargent
September 3, 2015
Google introduced a few new features to its Docs platform. Now you can talk to type — in 40 different languages.
SHOW TRANSCRIPT

Attention students! Google just flipped the switch on a feature that'll make typing up an essay as easy as saying "The dictionary defines 'courage' as ..."

Anyway, the company added what it's calling "voice typing" to Google Docs.

You just open up a new document, click on the Tools menu, and select "Voice typing..." Then, you just click on the microphone icon, and it's ready to type.

The company made a few other improvements to its platform, as well. Google Docs's Android app has a new research feature so you can pull in facts, images, quotes and more from Google search. Google Sheets features new visualization tools for all your data; and the company has added pre-designed templates for Docs, Sheets and Slides.

This video includes images from Google.