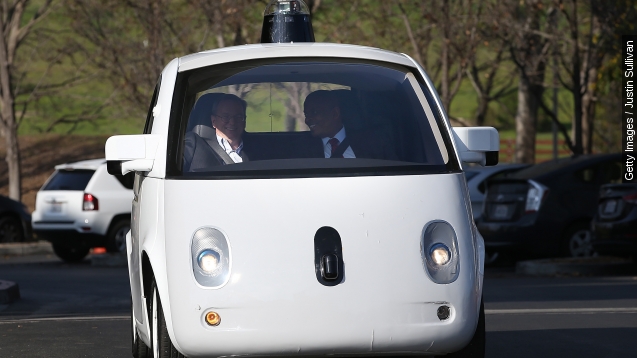 SMS
Google Blames Humans For Self-Driving Car Crashes — Again
By Kate Grumke
By Kate Grumke
July 17, 2015
Makers of autonomous cars have a tough task ahead: convincing humans they are the problem when it comes to safety, not driverless cars.
SHOW TRANSCRIPT

This video shows Google's first self-driving car accident that hurt humans. Passengers were treated for whiplash and minor injuries. But as Google would like to point out — the self-driving car stopped. It was the car behind it that "slammed into the back of us at 17 mph — and it hadn't braked at all."

According to Google, the reason its self-driving cars are getting into crashes is... us. Humans. You know, the ones who are doing things like texting and driving.

Since 2009, Google's cars have been involved in 14 crashes. In 11 of those crashes the car was rear-ended. Google says other drivers were the cause of all of those incidents.

"In 1885, Carl Benz invented the automobile. Later that year he took it out for the first public test drive and, true story, crashed into a wall. For the last 130 years we've been working around that least reliable part of the car, the driver," said Chris Urmson, the head of Google's driverless car program.

But even though the head of Google's driverless car program says that humans are the safety problem...

Safety is actually the main reason people wouldn't want a driverless car according to a recent study.

So companies making self-driving cars have their work cut out for them. They have to convince humans that humans are actually the problem.

Which is why Chris Urmson, the same guy from the TED talk, wrote about the crashes on Medium, "Our self-driving cars can pay attention to hundreds of objects at once ... and they never get tired, irritable or distracted. ... The clear theme is human error and inattention."