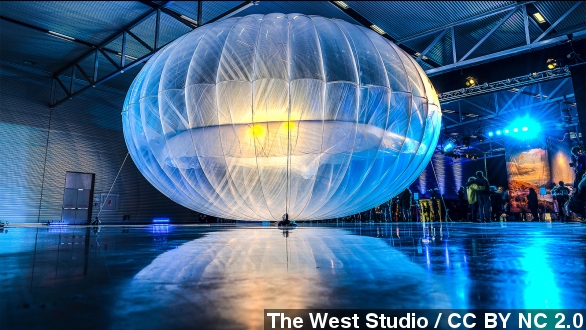 If you were to tell someone that Internet access could be spread around the world using giant balloons, they might say you're full of hot air. Well, Google's not only doing just that — they're getting good at it too.

Only one-third of the world has access to the Internet. Google is working to expand its network of LTE-enabled balloons floating in the stratosphere to provide Internet access to remote areas or during disasters.

The balloons stay in the stratosphere, more than 20,000 feet up, to take advantage of its predictable wind directions and speeds. The balloons ascend or descend into the proper layer of wind to move in the right direction.

Google's latest blog post announced its test balloons have traveled a collective 3 million kilometers since the start of the project last year — equivalent to nearly four trips to the moon and back.

Now, Google says it's refined its balloon manufacturing process to increase the life of the balloons to an average of about 100 days — 10 times longer than a year ago.

And it's made speed improvements to the inflating process. Google can now launch 20 balloons a day, thanks to a five-minute inflation time.

The project has had its problems, though. In fact, one of the balloons crashed in the center of South Africa. Another balloon crashed into a utility poll in Nevada in June. Google has since built a balloon-recovery team.

The project is still very much in the R&D phase, but Google has been partnering with a number of telecom providers to test its network. Telstra in Australia will host a 20-balloon network next month.

This video includes an image from Tyler Ingram / CC BY NC 2.0 and Getty Images.