Goldman Sachs CEO Endorses Clinton, Surprising Pretty Much No One 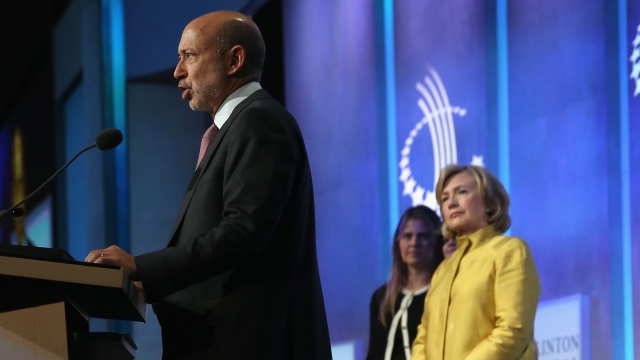 SMS
Goldman Sachs CEO Endorses Clinton, Surprising Pretty Much No One
By Eugene Daniels
By Eugene Daniels
October 24, 2016
At this point in the election, this endorsement probably isn't going to sway anyone.
SHOW TRANSCRIPT

"If the worst thing is that we have a history of having engaged positively with Hillary Clinton, that's not going to annoy me," Goldman Sachs CEO Lloyd Blankfein said.

The Clintons and Goldman Sachs have been connected for years now. Blankfein held a fundraiser for the former secretary of state during her first run for the White House. But this year, he said he'd stay out of the endorsing game, though he did call Clinton's primary opponent "dangerous."

And then there's, of course, the around $675,000 Goldman Sachs paid Clinton for speeches in 2013. That's been used by both Bernie Sanders and Donald Trump to attack Clinton throughout the election season.

What seems like transcripts of those speeches were hacked and then given to WikiLeaks. Blankfein protected Clinton against criticism brought on by the leaked transcripts, saying she didn't say anything "untoward."

Both Clinton and Blankfein have kind of justified any allegations of a cozy relationship to Clinton's time as a senator in New York and shrugged off any accusations of anything unethical ever happening.

This endorsement probably won't change the election at this point. With just over two weeks until Nov. 8, most people have made up their minds on who they're voting for. But it could harm her relationship with the progressive left, including Sanders fans who think she's corrupt and way too connected to Wall Street as it is.