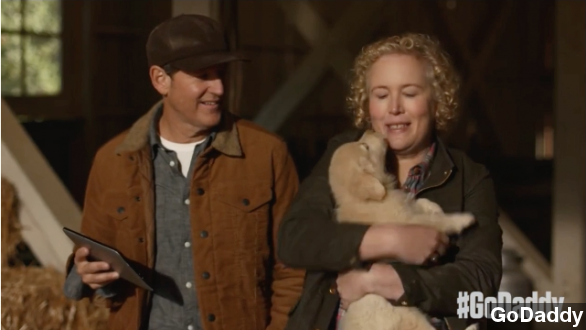 By the looks of the commercial we're about to show you, you might venture to guess it's a heartwarming Super Bowl advertisement. And you'd be wrong.

Buddy the Golden Retriever falls off the back of a truck. But look! He travels for miles — even through the pouring rain — before his triumphant return home. Cute? Yes. Inspiring? Sure. But not for long.

"Look it's Buddy! I'm so glad you made it home ... because I just sold you on this website i built with GoDaddy. Ship him out," said the woman in the GoDaddy commercial.

Ah, there's the GoDaddy we know and love! The web hosting company continues its trend of off-color and off-kilter advertisements meant to shock you into buying into its service.

On Tuesday, the company shared the not-so-heartwarming ad ahead of its appearance during the Super Bowl. Not long after its debut, the ad received criticism for making light of bad breeding practices and puppy mills. And others criticized the company for casting reputable breeders in a bad light.

The company published the advertisement on YouTube, but it has since been made private.

Following a period of backlash, GoDaddy's CEO Blake Irving announced in a blog post the company is pulling the advertisement from the Super Bowl. However, Irving said GoDaddy will still make an appearance during the game.

As for Buddy, the executive said the Golden Retriever came "from a reputable and loving breeder in California" and has since been adopted by an employee.

But here's the thing: America really doesn't like it when you mess with puppies, or any animals for that matter — commercial or otherwise.

I mean, you've probably seen the ASPCA commercial, and you may have even cried. You just don't mess with pets. So what was the company thinking? (Video via ASPCA)

In an interview with Ad Age ahead of the advertisement's debut, GoDaddy's Chief Marketing Officer explained the company's intentions.
"People love cute little puppies in Super Bowl commercials, right? The power of our next Super Bowl ad is how it pivots from what you think is a traditional 'Hallmark' style commercial into something unexpected."

While GoDaddy certainly succeeded in providing an "unexpected" commercial, it did not succeed in distancing itself from what some have called "tasteless" advertisements.