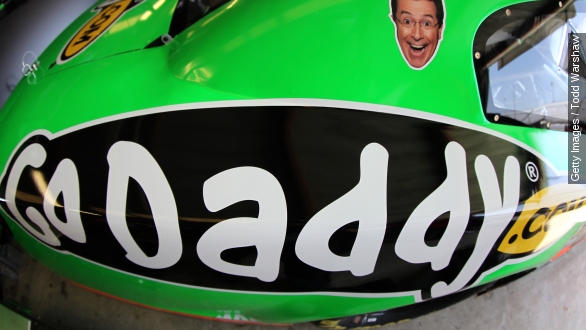 GoDaddy — the online domain registrar known as much for its spokesperson as what it actually does — went public Wednesday with widely differing views of the company's prospects.

"There's the opening bell and a look at the S&P at the top of your screen," CNBC's Carl Quintanilla said.

The company gave a small, if modest, surprise Tuesday night by filing its IPO price at $20 per share. That's up from an anticipated $17 to $19 and signaled some optimism from the company.

The company also released this video around midnight ahead of going public.

"You don't need computers to make beer, but these days you need the Internet and a good website to sell it," said Marc Rosenblum of Santa Cruz Ale Works.

If that video and other recent high-profile commercials seem to have a different feel from past GoDaddy ads, it's on purpose. The company has tried to rebrand itself to grab the attention of small-business owners in recent years — a big contrast from past Super Bowl commercials that were often overtly sexual or risque.

CEO Blake Irving — who was on the New York Stock Exchange floor and made the rounds on cable Wednesday morning — had to be pretty happy with the way the stock started out. (Video via CNBC)

It jumped roughly 30 percent in price Wednesday and stayed in that $26 to $26.50 range for most of the morning.

But there are still doubters. Much of the analysis of the company Wednesday circled around its significant debt and how part of the IPO went to paying some of it off.

We might find out soon if a focus on small business can lead to big profits. (Video via GoDaddy)