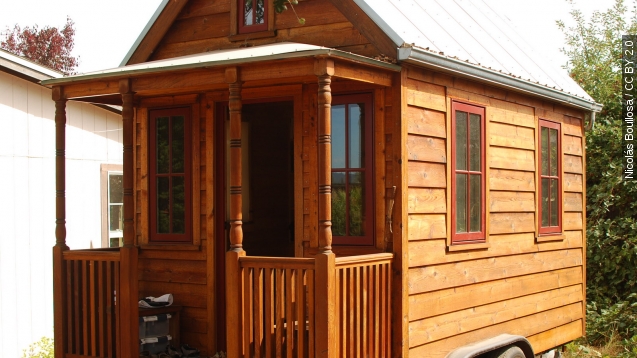 There's a movement sweeping the nation, but if you're claustrophobic it's probably not for you.

It's known as the "tiny house movement," where people are downsizing their homes — dramatically — to live simpler lives.

And by dramatically we mean down to about 150 square feet sometimes — one-sixteenth the size of the average new home completed in 2014.

There are societies, conferences, jamborees and a handful of TV shows dedicated to the topic.

There's apparently enough interest in the tiny dwellings that HGTV has three shows on the topic. (Video via ABC News).

For many tiny-home owners, it's about dialing down to get more out of life.

"For us I think going smaller made a lot of sense. We started really realizing what's important to us lifestyle-wise — traveling and doing things outside the house, not being restricted by the cost." (Video via FYI Television Network).

It's no surprise that tiny homes tend to be much more affordable than their average-sized counterparts; although  high-end, luxury versions do exist.

Another benefit of tiny homes is their impact on the environment. TinyHouseBuild.com reports tiny homes, on average, produce 93 percent less CO2 than normal homes.

As the saying goes, if you build it, they will come. They just might have to duck their heads to get in.