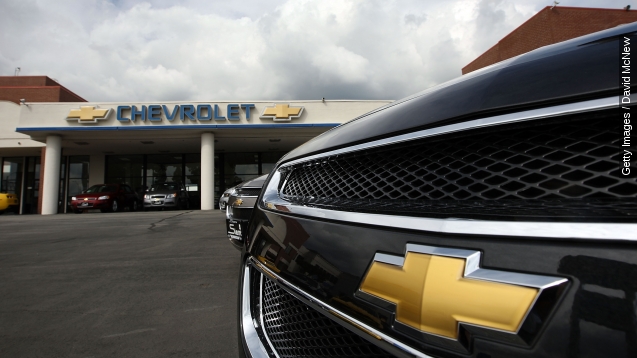 SMS
GM Might Face Wire Fraud Charges And Costly Settlement
By Matt Patston
By Matt Patston
June 9, 2015
According to anonymous sources quoted in The Wall Street Journal, the DOJ is considering charging the Detroit automaker with wire fraud.
SHOW TRANSCRIPT

General Motors could be on the hook for more than a billion dollars after failing to disclose ignition switch problems in the early 2000s.

The U.S. Department of Justice is reportedly considering charging the automaker with wire fraud, according to The Wall Street Journal. The charges stem from an ignition switch defect the company first noticed in 2001 and largely ignored for about a decade. (Video via WXYZ)

If the DOJ doesn't charge GM with a crime, prosecutors could give the automaker the option of a deferred prosecution agreement, where the company pays a fine and cooperates with the DOJ to stay out of court.

"Rather than promptly disclosing and correcting safety issues about which they were aware, Toyota made misleading public statements to consumers and gave inaccurate facts to members of Congress," former Attorney General Eric Holder said in 2014.

Toyota's case used a creative legal argument against automakers. For Toyota and potentially GM, the fraud comes from misleading consumers about the safety of vehicles, which boosted sales on defective cars rather than actually defrauding the consumer of property.

Because Toyota opted for a deferred prosecution agreement, it's unknown how this legal theory would hold up in court. (Video via PBS)

But GM isn't likely to test that, either. The last thing a public relations nightmare needs is a drawn-out court case. Unlike Toyota, GM has been cooperative with the DOJ investigation. (Video via General Motors)

Since taking over as GM CEO in 2014, Mary Barra has tried to purge the company of the scandal, commissioning internal investigations and firing executives who mishandled the defect. (Video via C-SPAN)

But even though GM is cooperating now, its mistakes will probably translate to a bigger settlement than Toyota's. The ignition switch defect is estimated to have caused more than 100 deaths. (Video via CCTV)

The Wall Street Journal reported the possible charges, but because of the delicate legal situation, almost all quoted sources are anonymous. Regardless of whether charges are filed, GM will likely have a high bill to pay.