Giuliani Not The First To Say 'Obama Doesn't Love America' 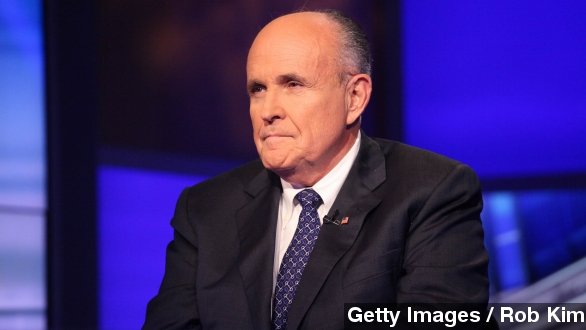 As a former presidential hopeful himself, it probably isn't surprising Rudy Giuliani isn't a big fan of the man now sitting in the Oval Office.

But the former New York City mayor spoke Wednesday night to a private gathering of conservatives — just the right spot for a little Barack Obama bashing. And Giuliani didn't hold back.

Politico reports Giuliani told the dinner group, "I do not believe, and I know this is a horrible thing to say, but I do not believe that the president loves America."

A bold, if perhaps over-the-top, statement on the leader of the free world.

The dinner featured Wisconsin Governor Scott Walker, who himself is considering a presidential run. We don't know what Walker said because Politico says the governor's aides insisted his comments were off the record. (Video via ABC)

On Fox News, though, Giuliani did later call the president a patriot. Here's how he clarified the reports:

"I do hear him criticize America much more often than other American presidents. ... It sounds like he's more of a critic than a supporter."

It's criticism other former opponents have hurled at the president.

"The president of the United States, let's just be clear, he doesn't believe America is exceptional," Rick Santorum told a crowd in 2011.

"Since September 11, many people have called New York City a city of heroes," Giuliani said in September 2001 on NBC's "Saturday Night Live." "Well, these are the heroes."

But back to Giuliani. His national celebrity status certainly isn't what it was following his leadership during the 9/11 attacks or leading up to the 2008 Republican primaries when he managed to briefly out-fundraise even the frontrunners, John McCain and Mitt Romney.

"We will never forget the American hostages who were held by the Iranians," Giuliani told the Iranian American Community of Arizona. "It seems to me President Obama has forgotten it."

But how much clout Giuliani has outside his political celebrity status likely depends on your perspective. He said last year he hadn't ruled out running for public office again but said he wouldn't run for New York City's mayor.

And he told Walker he'd endorse the 2016 Republican presidential nominee, whether that be Walker or another candidate.

Giuliani also criticized Mr. Obama's comments two weeks ago at the National Prayer Breakfast when he told the crowd extremist Islamic militants in the Middle East weren't so different from Christians during the Crusades.

Again, Obama was seen as having a tough stance on his own country, with The Washington Post opening its article stating the president, "has never been one to go easy on America."

President Obama's aides have stood by his comments, saying history's seen countless campaigns of violence in the name of religion.