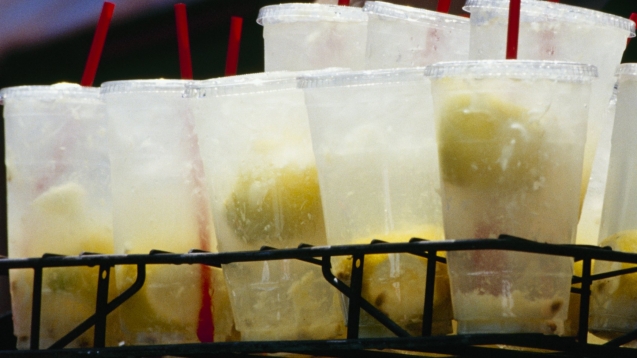 SMS
Girls Receive Support After Police Shut Down Lemonade Stand
By Becca Dunn
By Becca Dunn
June 11, 2015
Police shut down two Texas girls' lemonade stand because they didn't have a permit. They were raising money for a Father's Day gift.
SHOW TRANSCRIPT

Andria and Zoey Green from Texas set up a lemonade stand to raise money for a Father's Day gift, but the small business was quickly shut down.

"We were there for about an hour and the police department pulled up, code enforcement officer and the chief. She pulled me to the side and said we needed a permit," said their mother, Sandi Green Evans.

Yes, a permit for the 7- and 8-year-old sisters to sell lemonade.

"I felt a little confused. I was like, what is, what is going on here?" said Andria.

But the state of Texas' health guidelines "prohibits the sale of food which requires time or temperature control to prevent spoilage."

Which includes selling lemonade. Even if it's being sold from an adorable stand.

Officers agreed to waive the penalty fine. And thanks to all the attention this story has been getting, we think the girls might end up with more than they expected.

The Father's Day gift they were planing was a trip to Splash Kingdom. The theme park ended up giving them tickets for free. And on top of that, they've received tickets to Six Flags, too.

The girls have decided to try again but this time will give out lemonade for donations instead of selling since you don't need a permit if you aren't making a profit.

And we think the donations might end up being more than they were charging anyway. The local paper reports hundreds have promised to show their support and come to their lemonade stand Saturday.

Their family told the paper all of the extra money raised will be given to local scholarship funds.