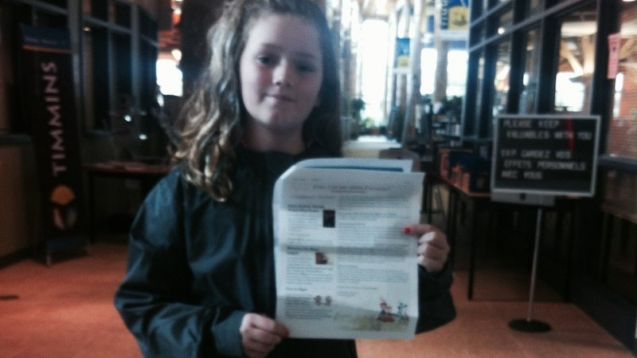 SMS
Girl's Petition Helps Change Boys-Only Robotics Class
By Eugene Daniels
By Eugene Daniels
July 4, 2015
A girl in Ontario started a petition so she could join the robotics club at her local library. This comes as the tech world works on its gender gap.
SHOW TRANSCRIPT

An all-boy club for anything sounds weird to many of us nowadays, but that's exactly what was going on ... in a library of all places.

The Timmins Public Library in Ontario denied letting girls into a summer session on robotics. That was until this Change.org petition by Cash Cayen went online and got over 30,000 supporters.

Cash says the library wouldn't let her join the session because it was only offered to boys. They did offer to put her on a waiting list.

This all comes as the effort to get women and girls interested in the world of science and engineering continues to gain traction.

And it seems to be working. A study by the National Science Foundation found girls are earning math and science credits at roughly the same rates as boys.

And in the workforce between 1993-2008, women in science and engineering jobs increased about 5 percent.

Some blame the gender gap on early interactions girls have with science.

"Is it also about the messages we send to girls?"

"It's about the messages. Yeah, that it's okay to be smart, that it's cool," Renee James, president of Intel told CNN.

"Solutions have to involve the schools encouraging and driving women to continue with the STEM subjects and continue in those types of fields," Ford of Europe's COO Barb Samardzich told International Business Times.

The library has issued an apology for what it called a "misunderstanding," and Cash updated her petition Friday saying she's been told the event is now open to all children.

This video includes images from Getty Images and USAID Asia / CC BY NC 2.0.