Girl's Lunchbox Reportedly Gets Her Sent Home From School 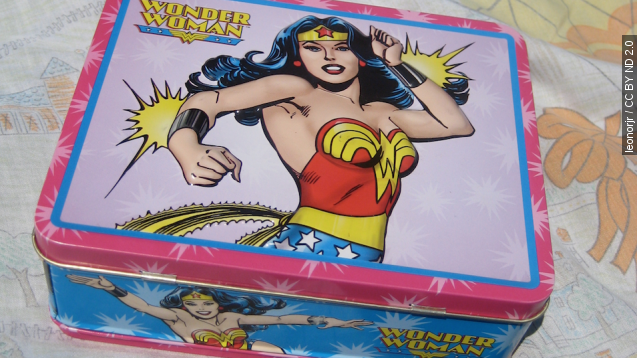 Great Hera! One girl was reportedly sent home from her school after she brought a lunchbox with Wonder Woman on it.

Now, the lunchbox looked just like this: On one side, Wonder Woman is seen holding her Lasso of Truth, while her profile is featured on the other.

A friend of the girl's parents posted photos of the lunchbox, along with the letter the school sent explaining why she was sent home, to Imgur.

The letter, in part, said: "The dress code we have established requests that the children not bring violent images into the building in any fashion. ... We have defined 'violent characters' as those who solve problems using violence. Super heroes certainly fall into that category."

So, guess this lunchbox wouldn't fit into the code, either. That dang lasso again. She just can't leave home without it.

Now, we know no specifics about the student other than her name is Laura.

But that didn't stop the story from blowing up all over the Internet.

Even actress Lynda Carter, who starred in the "Wonder Woman" television show from 1975 to 1979, tweeted about the story.

But as the "Fox and Friends" anchors pointed out, Wonder Woman isn't even meant to be a violent character.

"They look to get evildoers off the street. I believe that's Wonder Woman's mantra," Brian Kilmeade said.

"I dare you to find some 10-pack of underwear or 6-pack of underwear without a superhero on them for boys. I mean, what's next? You're going to go in and inspect? This is ridiculous," Elisabeth Hasselbeck said.

Since so few details were provided, we don't know if Laura's parents were able to work something out with the school so she could continue bringing her Wonder Woman lunch box in with her.

This video includes an image from Scott Rubin / CC BY 2.0.