Giants Of The Sea Aren't As Big As You'd Think 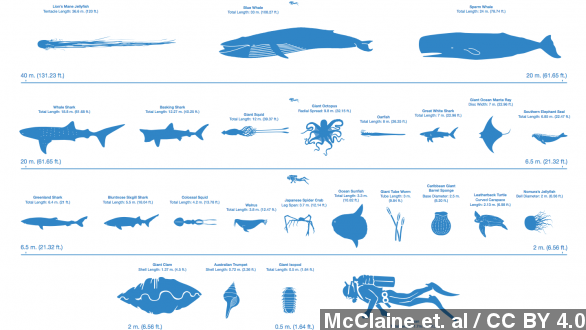 When you think of the giant squid, you might picture an enormous Kraken-like deep-sea-dwelling beast with tentacles that can wrap around ships and pull them under.

As Liam Neeson said in the 2010 film "Clash of the Titans," "Release the Kraken!"

Although the real giant squid is pretty big — it can reach lengths of 40 feet — it's not that big. More than half its length is made up of two super-long feeding tentacles, and the median size for the squid is just 24 feet. (Video via Discovery)

It seems overestimating the size of notoriously big ocean-dwellers is a common problem for both the media and scientists.

Researchers looking to see the exaggerated sizes of a number of animals, including the blue whale and the great white shark, compared the average size of these animals to their reported sizes.

A lot of the time, it seems the trouble comes down to the practical problems in estimating the size of some of the animals, which can often prove elusive and inconsistent.

For example, filter-feeding whale sharks, although generally docile, still present a challenge when it comes to measuring — you can't exactly stretch a tape measure down the side of a living, swimming animal, and the estimated sizes of the shark vary from region to region. (Video via GoPro)

That's just one of a number of factors the scientists cited in their conclusion, but probably one of the more powerful — and least quantifiable — reasons is folklore.

Stories of sea monsters have filled mythology for thousands of years, from the ancient Phoenicians to the Greeks to Moby Dick, and they are stories that continue to captivate us to this day. (Video via Warner Bros. / "In the Heart of the Sea")

And at least part of that is probably due to the fact that we know so little about so much of the ocean — the National Oceanic and Atmospheric Administration estimates we have only explored 5 percent of the world's oceans, which cover some 70 percent of the planet's surface. (Video via National Oceanic and Atmospheric Administration)

The researchers say what is key is understanding that the largest recorded specimen of a species is not representative of the species as a whole and that extreme variability exists across all species.

This story includes an image from Kousto / CC BY NC ND 2.0.