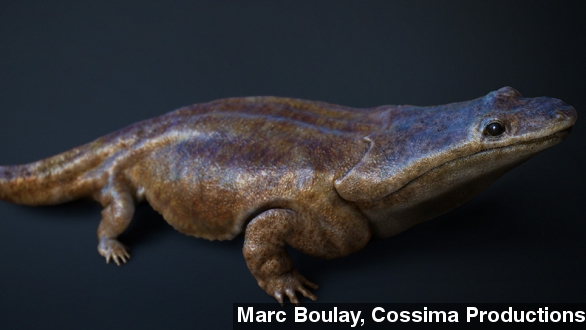 Most modern-day salamanders are miniscule with a large portion of the hundreds of different species measuring less than 8 inches.

There are some exceptions, like the Japanese giant salamander, which can reach lengths of 5 feet. (Video via National Geographic)

But even the Japanese giant would have been dwarfed by Metoposaurus, a genus of ancient amphibians that could grow to be as much as twice the size of today's biggest salamander.

Researchers recently discovered a new species of Metoposaur — M. algarvensis — in the Algarve region of southern Portugal on the Atlantic coast.

To get an idea of how imposing the 200 million-year-old giant predator would've been, just listen to this description from lead researcher Steve Brusatte. (Video via American Museum of Natural History)

He said it "looks like something out of a bad monster movie. It was as long as a small car and had hundreds of sharp teeth in its big flat head, which kind of looks like a toilet seat when the jaws snap shut."

All right, so the toilet seat bit isn't super intimidating, but nonetheless, the amphibian would've filled a crocodile-like niche and could've preyed on dinosaurs that strayed to close to the water. (Video via BBC)

While Metoposaurs have been found all over the globe, this represents the first species found in the Iberian Peninsula, and it joins two other European species.

The researchers believe the fossils they've discovered could be part of a mass grave that developed when the lake the animals lived in dried up — something which wouldn't be uncharacteristic, as paleontologist Larry Rinehart explains.

"They are often found in large deposits, which leads us to believe that they were gregarious for some reason: feeding or breeding, or not quite sure what, but we have some clues," Rinehart said. (Video via New Mexico Museum of Natural History and Science)

The paper notes similar sites have been found in Africa and North America. Metoposaur is thought to have died out in the late Triassic.

This video includes images by Octavio Mateus, Marc Boulay, Cossima Productions and Daniel Oines / CC BY 2.0 and music by Matt Lloyd / CC BY 3.0.