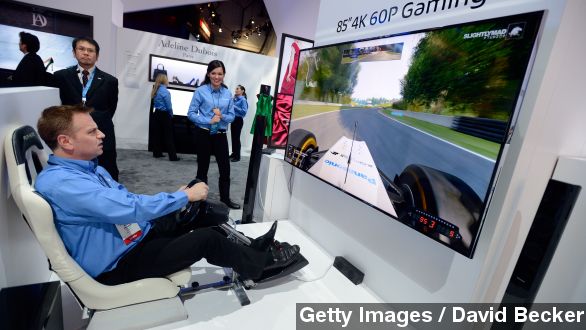 SMS
Giant Televisions Dominate Early Reveals At CES 2015
By A.J. Feather
By A.J. Feather
January 6, 2015
Next-generation televisions are front and center at this year's Consumer Electronics Show, but are consumers ready to invest in the technology yet?
SHOW TRANSCRIPT

The Consumer Electronics Show in Las Vegas doesn't technically kick off until Tuesday, but the products started lining up and presentations were already in full swing a day early. And it seems the theme so far this year is clear — giant TVs.

Samsung, LG and Sony each hit the stage to announce a slew of new and large televisions. And as expected, many feature 4K screens and quantum-dot technology.

These features go hand-in-hand. LED screens made TVs much thinner and easy to produce but their backlighting was bad for color accuracy. As The Verge reports, "Many TV makers initially turned to OLED displays as a way to improve the way TVs looked, but ran into issues mass producing them, a problem that was compounded in the shift from 1080p to 2K, 4K, and beyond."

LG released a set of 4K quantum-dot and OLED televisions. Its top-of-the-line model is a 77-inch OLED TV that features a display that can switch from flat to curved via a motorized bezel.

There's no price on the set, but Wired estimates it will cost as much as a car, maybe even a luxury car.

Samsung kept its focus on picture, announcing an engine it refers to as SUHD TV. The company also announced some updates including virtual reality content for its Milk streaming service that can be used with its Gear VR.

And if you want to make your own 4K home videos, Sony announced a new 4K model for its popular consumer-focused Handycam line that will retail for $1,000, half the price of the 4K camera the company announced last year.

Next-generation television line-ups are finally flushing out, but it will be consumers who decide whether it's time to begin adoption. Stay with Newsy for more coverage of CES 2015.