Japanese Repaired A Giant Sinkhole In Just A Few Days 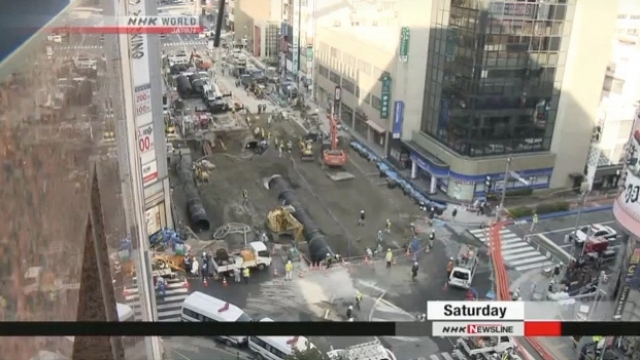 SMS
Japanese Repaired A Giant Sinkhole In Just A Few Days
By Lindsay Gloor
By Lindsay Gloor
November 15, 2016
Workers in Japan managed to fix the damage from a sinkhole, which spanned a five-lane road, in just under a week.
SHOW TRANSCRIPT

Workers in Japan took just days to fill a sinkhole that stretched across a five-lane road.

The sinkhole appeared early last week in a southwestern Japanese city outside a busy railway station. Surrounding buildings were evacuated as it threatened to take structures down with it.

One bystander told the Kyodo News Agency, "The electricity went off suddenly, and I heard a loud boom."

SEE MORE: This Sinkhole Swallowed More Than A Dozen Cars In Florence, Italy

But the quick repair — which included reinstalling electricity, water, sewage, gas and telecommunication lines and resurfacing the road — illustrates Japanese engineering and efficiency.

The speed with which the construction workers completed the task was reminiscent of the effort to reopen damaged roads after the March 2011 triple disaster. More than 18,000 people died after a tsunami was triggered by the strongest recorded earthquake ever in Japan. The tsunami destroyed whole towns and caused a triple meltdown at the Fukushima Daiichi nuclear power plant.

As for this recent sinkhole, The Guardian reports that workers filled it with 6,200 cubic meters of sand and cement.

One local official told CNN that nearby construction to expand the city's subway line might have caused the collapse.

Any hole in the ground created by wear and tear and water drainage can be considered a sinkhole. They are frequently caused by natural processes but can also be the result of human activity. Their actual size does not matter, but they can be just a few feet across or large enough to swallow entire buildings.

No one was reported injured in the sudden collapse. The roadway reopened a week later on Tuesday.