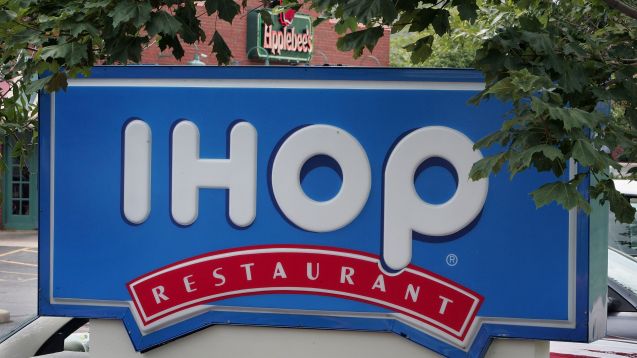 SMS
Giant Sinkhole In IHOP Parking Lot Swallows 15 Cars
By Mari Jo Valero
By Mari Jo Valero
November 9, 2015
A giant sinkhole opened up in the parking lot of an IHOP in Meridian, Mississippi. Fifteen cars were swallowed but no one was injured.
SHOW TRANSCRIPT

When you think of IHOP, you probably think of eating some delicious pancakes. But over the weekend, it was IHOP that was doing the swallowing. (Video via IHOP)

A giant sinkhole opened in the parking lot of a new IHOP in Meridian, Mississippi, Saturday night. The sinkhole was about 50 feet wide and 600 feet long — that's almost twice as long as a football field. (Video via WJTV)

Lt. Rita Jack with the Meridian Police Department told NBC News: "The sinkhole is huge. ... We are talking 14 to 15 vehicles. It is very scary. We are so fortunate that no injuries were sustained."

People in the restaurant say they heard a series of booms that were so loud, one IHOP employee thought it was an earthquake.  No one was injured in the incident. (Video via WLOX)

Sinkholes happen when underground water dries up, leaving a void. WTOK reports the area had seen around 10 inches of rain that week. (Video via WTOK)

Engineers and contractors will arrive at the scene Monday to repair the damage and determine the cause of the sinkhole.