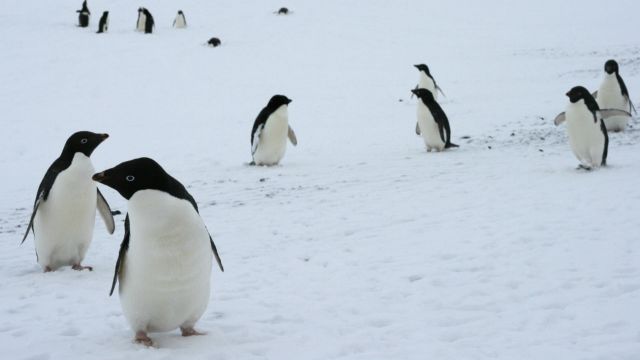 An iceberg almost the size of Rhode Island has trapped a colony of Adélie penguins at Commonwealth Bay in East Antarctica, killing 150,000 of them.

The 160,000 penguin population dwindled to just 10,000 over the course of six years, according to Climate Change Research Center at Australia's University of New South Wales.

Basically, the penguins ended up landlocked.  The iceberg cut off their food supply and the flightless birds were forced to waddle 40 miles to look for food.

Chris Turney, the professor who studied the Adélie penguins' numbers told The Sydney Morning Herald "As the planet warms you're going to get more ice melting. The reality is, more icebergs will be released from Antarctica and just embed themselves along the coastline, and make the traveling distances for some of these colonies even further than they have been."

The penguins' breeding habits were inhibited as well. They usually return to the colony where they hatched to mate and nest but the iceberg trapped them.

Scientists predict the colony will die out completely in 20 years unless the ice breaks up or the iceberg moves from the shore.

This video includes images from Getty Images and Christopher Michel / CC BY 2.0, clips from BBC and Warner Independent Pictures.