Giant Crack In The Earth Mysteriously Appears In Wyoming 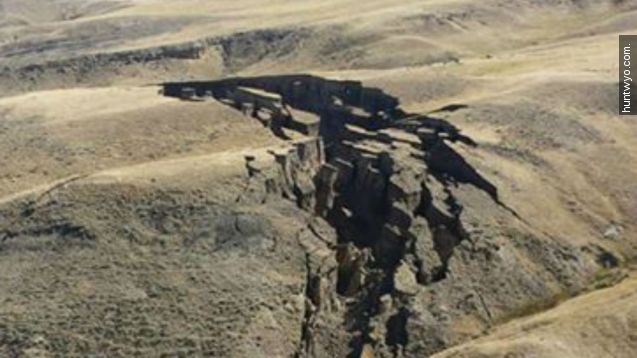 SMS
Giant Crack In The Earth Mysteriously Appears In Wyoming
By Kaileen Gaul
By Kaileen Gaul
November 1, 2015
A crack mysteriously appeared in Bighorn Mountains in Wyoming. No one saw the crack emerge, but experts have some ideas about what happened.
SHOW TRANSCRIPT

A gash that's six times as long as a football field mysteriously opened up in the earth in Wyoming.

A guide from SNS Outfitter & Guides first stumbled upon the crack while hunting in the Bighorn Mountains in early October. Weeks later, the crack had grown to about 50 yards wide.

No one saw the earth split open, but the Wyoming Geological Survey said the gash appears to be from "groundwater creating weakness in an unstable hillside."

The organization hasn't visited the crack yet, but it says people should avoid approaching it.

SNS Outfitter & Guides had an engineer check it out. It said in a Facebook post, "Apparently, a wet spring lubricated across a cap rock. Then, a small spring on either side caused the bottom to slide out. He estimated 15 to 20 million yards of movement."

Obviously, a giant split in the earth is causing some concern. But experts say there is no immediate danger because of the remote location.

This video includes images from SNS Outfitters and Guides.