'Get Hard' Criticized For Making Light Of Sex Abuse 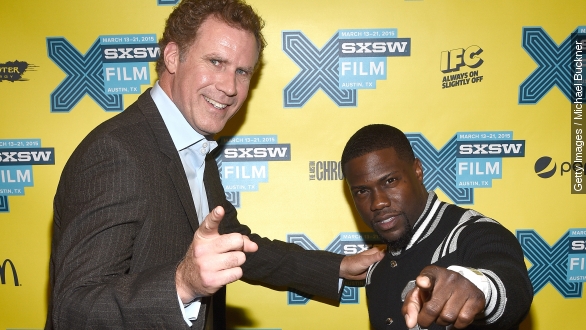 SMS
'Get Hard' Criticized For Making Light Of Sex Abuse
By Ben Lawson
By Ben Lawson
March 27, 2015
Will Ferrell and Kevin Hart's buddy comedy "Get Hard" has found itself in hot water for making light of sexual assault.
SHOW TRANSCRIPT

Will Ferrell and Kevin Hart's buddy comedy "Get Hard" probably intended to be an enjoyable satire of class division, racial prejudice and homophobia. But judging by early reviews, it comes off as more of a perpetrator of those issues than anything else.

After being sentenced to 10 years in prison for fraud, Will Ferrell enlists Kevin Hart to toughen him up because he's afraid of "prison rape" and assumes Hart knows all about the big house. Hart, a nerdy business owner, is the exact opposite of street-wise but needs the money and obliges.

At its worst, "Get Hard" is accused of trivializing the very real issue of rape by making it the source of its humor.

The Rape, Abuse and Incest National Network reports that 1 in 6 American women have been the victim of sexual assault and, according to separate survey, 1 in every 10 prisoners reported sexual abuse while in prison.

And a writer for The Week accuses this movie of placing the victims as punchlines of a joke, saying, "We can't reverse a sexual assault epidemic in a single day, [but] we can at least agree to stop laughing at its victims, turning a horrific and traumatic experience into lazy, dehumanizing jokes about dropping the soap."

Ferrell and Hart have both acknowledged claims the movie perpetuates these issues more than satirizes them.

"We didn't come up with those fears; they're just a societal norm. So that's where the comedy comes from," Ferrell said.

All this isn't to say the movie doesn't manage to snag a few laughs. This is Will Ferrell and Kevin Hart at their most absurd, after all. But critics say the movie takes advantage of issues like racism and rape culture to make those jokes.

A writer at Slate points out the movie does achieve its goal of satirizing racial issues with Ferrell's cluelessly privileged character, but that manages to be dwarfed by nearly every character in the movie falling into a stereotype — except for Hart.

"Get Hard" earned a measly 32 percent on Rotten Tomatoes, and while Hart and Ferrell are well-regarded funnymen, critics seem to agree the movie's humor overall misses more than it hits.