Germany's Border Controls Could Force Other Nations To Act 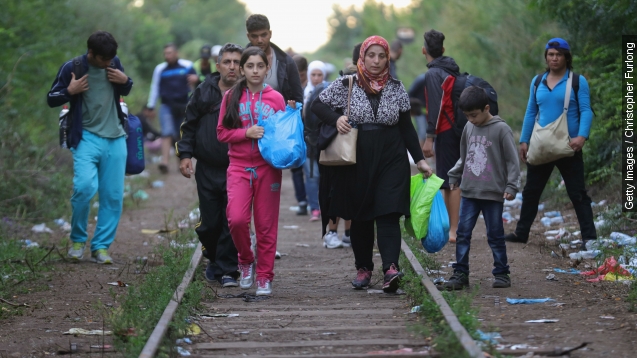 SMS
Germany's Border Controls Could Force Other Nations To Act
By Eugene Daniels
By Eugene Daniels
September 13, 2015
Germany has reinstated its border controls because of the influx of refugees, which could force other countries to agree on a long-term refugee plan.
SHOW TRANSCRIPT

Germany is rolling back its welcome mat. The country announced Sunday it was "reinstating border controls" as it struggles to deal with the number of refugees entering the country.

Germany is literally running out of places to put them. Munich's mayor says 12,000 refugees came to the city just on Saturday.

"I don't want to park people somewhere. We're still talking about human beings. I want to make sure that, in my city, people don't have to sleep under bridges," Munich's Mayor Deiter Retier said.

The move means that Germany has exited, at least for now, the Schengen system, which basically creates a border-free zone for countries within the European Union. (Video via BBC)

To be fair, Germany has been pretty welcoming to the refugees, but its interior minister says the burden shouldn't fall so heavily on Germany.

Border controls could begin to force other nations to agree to a more permanent plan to aid the thousands of refugees seeking sanctuary in Europe.

Countries like Germany and France have pushed for a quota system that would distribute refugees according to population and the relative wealth of each country. There's still little to no agreement about the plan, but as the refugee crisis grows more urgent, world leaders are feeling more pressure to get on the same page. (Video via United Nations High Commissioner for Refugees)

The opportunity to do so could come Monday, when interior ministers from across the EU meet to vote on a new refugee redistribution plan.