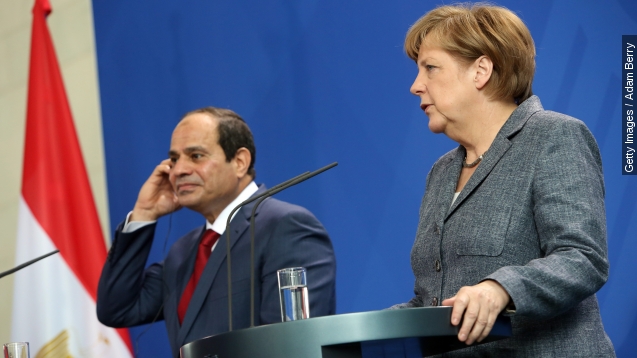 Egypt has it out for Al Jazeera. (Video via Egyptian Radio and Television Union)

The country's totalitarian government has in the past struck out at the international network — funded by Egypt's rivals in the government of Qatar — by ordering its offices closed, confiscating its equipment and arresting its journalists. (Video via SBS)

That's why, when an Al Jazeera journalist was arrested on Egyptian orders Saturday, the surprising thing was who carried them out.

German authorities reportedly detained Ahmed Mansour, who has dual British and Egyptian citizenship, at Berlin's Tegel airport Saturday. The BBC reports an Egyptian court sentenced him in absentia for torture charges last year, which Mansour and Al Jazeera have both dismissed. (Video via Al Jazeera)

And, as many outlets have noted, this arrest comes just weeks after Egyptian President Abdel-Fattah el-Sisi met with German Chancellor Angela Merkel in Berlin, putting the awkward relations between Egypt and Western states on display. (Video via German Chancellery)

While the two shook hands and even joked, diplomatic ties between the West and longtime ally Egypt have cooled since a coup in 2013 removed democratically elected leader Mohammed Morsi, who has since been sentenced to death. (Video via CCTV)

Those ties have showed signs of strengthening. The U.S. recently resumed military aid to Egypt after cutting it off in the wake of the coup, but Saturday's arrest is a sign of how Egypt's hardline internal policy could be bleeding over to the international stage.

Within Egypt, authorities have cracked down on Muslim Brotherhood supporters, killing protesters and imprisoning and sentencing hundreds to death. Qatar has supported the Brotherhood throughout the crackdown, straining relations between the two countries. (Video via Press TV)

The relationship between Germany and Egypt is a little more complex: As Bloomberg explains, "Merkel sought to strike a balance between criticism and support for continued relations with Egypt in an unstable region."

Germany has also pledged military aid to Egypt in the form of submarines and support for Egypt's infrastructure, with German company Siemens slated to build power plants in the country. (Video via German Federal Ministry of Defense, Siemens)

Mansour, who has been tweeting throughout his detainment, says he expects to be taken before an investigating judge in Germany.