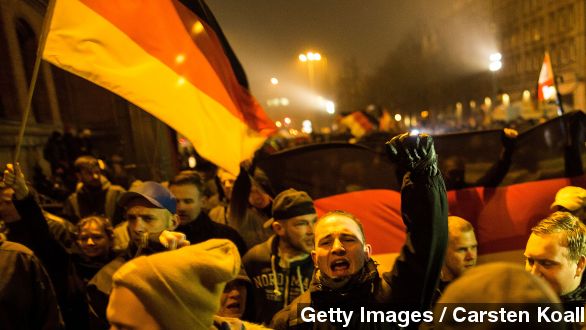 Germany's anti-Islam movement just had it biggest march yet. What started as a few hundred protesters in October ....  (Video via YouTube / Boris Niehaus)

... grew to 18,000 people in Dresden Monday night, with similar protests in Berlin, Cologne and Stuttgart. (Video via YouTube / Rafael Cordón)

They’re rallying against what they call an “Islamisation of Europe" — chanting things like "we are the people" and "wake up." (Video via YouTube / Rafael Cordón)

A group called PEGIDA, otherwise known as "Patriotic Europeans Against the Islamisation of the West", is organizing the protests.

PEGIDA says it's not xenophobic or racist and merely wants to preserve what it calls Germany’s “Christian-Judeo culture.” But the thousands of Germans who turned up for counter protests say otherwise.

In a show of solidarity with those protesters, Cologne's famous cathedral turned off its lights. (Video via YouTube / Arne Peine)

As did the Brandenburg Gate in Berlin.  (Video via Euronews)

"Say it loud, say it clear, refugees are welcome here."

In some cities, the counter protesters outnumbered the PEGIDA protesters Monday night.

As one Berlin-based journalist put it, “Seems like Germany is showing Europe how to quash a xenophobic movement tonight.”

The protests have forced a public debate over Germany’s relatively liberal immigration laws.

Thanks to a strong jobs market, Germany has become a popular destination for immigrants — taking in more refugees than any other country in the European Union. (Video via Deutsche Welle)

Asylum claims have risen dramatically with 200,000 asylum seekers having entered the country in 2014 alone. That’s four times as many as in 2012. Many are from Syria, Afghanistan and Iraq.

The influx of immigrants appears to be a concern shared by many Germans. A poll by magazine Der Spiegel found 34 percent of citizens think the country is becoming “increasingly Islamicized.”

In her New Year’s speech last week, German Chancellor Angela Merkel addressed this anti-immigrant sentiment, and condemned those who have, as she put it, “hatred in their hearts.” (Video via Ukraine Today)

Possibly in response to the protests, Merkel's coalition partners are considering revamping the country's immigration system, and fast-tracking the deportation of refugees who are rejected asylum.