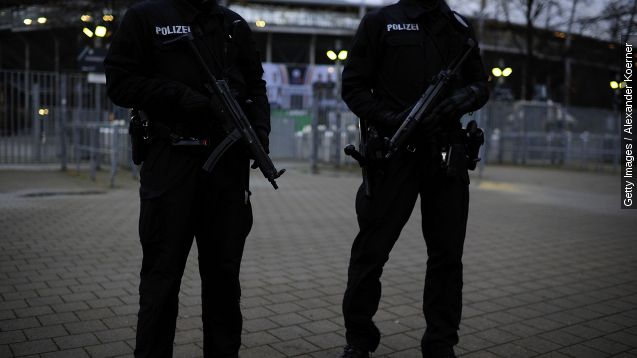 SMS
Germany-Netherlands Soccer Match Canceled After Bomb Threat
By Grant Suneson
By Grant Suneson
November 17, 2015
A suspicious package found inside a soccer stadium in Hannover prompted officials to cancel a planned match between Germany and the Netherlands.
SHOW TRANSCRIPT

A friendly, international soccer match between Germany and the Netherlands was canceled due to bomb threats 90 minutes before it was slated to begin. A suspicious package was found inside the stadium in Hannover, Germany.

German Chancellor Angela Merkel planned to attend the match along with several of her top cabinet members. She was diverted before making it to the stadium, according to Mirror.

Europe is on heightened alert following the terror attacks in Paris on Friday; the bomb scare comes as Europeans try to get their lives back to normal.

The German team was on the pitch just four days earlier against France when several suicide bombers detonated explosives outside the Stade de France.

On Monday, the Belgian squad cited concerns about security when they canceled their match against Spain.

Despite security concerns in other countries, many other international teams took the pitch including France taking on their rival England, even though the British offered to cancel.

British fans showed their support for Paris, waving French flags and joining in the singing of their national anthem.

Getting back to playing could provide a welcome return to normalcy for some of the French players. Midfielder Lassana Diarra’s cousin was one of the 89 people killed in the attack on the Bataclan concert hall, and forward Antoine Griezmann's sister escaped the attacks.