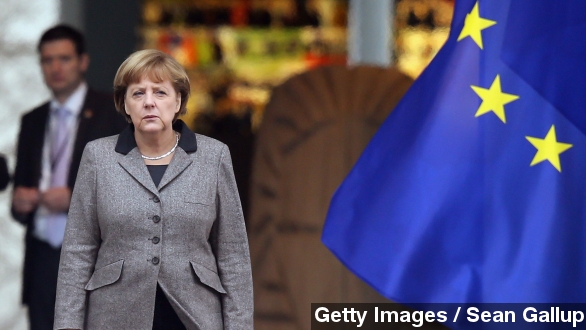 Angela Merkel and Germany are following the example of some of their European neighbors and plan to implement quotas for women in boardroom positions — a move that's not without its critics.

Speaking before the German parliament, Merkel voiced her support for a new law, which would require that almost one third of the board positions at Germany's biggest companies be women by 2016. (Video via Phoenix)

The push to get more women in leadership positions is nothing new, but it's notable that Germany — the biggest economy in Europe — is only now getting around to the quota system, almost a decade after one was first implemented by Norway in the last decade. (Video via Deutsche Welle)

As The Economist points out, one reason for the increasing popularity of quotas — they're being considered by Britain and Australia among others — could be a "growing impatience with the glacial pace of voluntary change: women are the majority of all graduates almost everywhere in the developed world, but make up a smaller share of the workforce the further up the corporate ladder they go."

And use of quota systems has the backing of some big time players in finance, including the head of the International Monetary Fund, Christine Lagarde.

"I soon realized unless we had at least targets, if not quotas, there was no way we were going to jump the right step in order to have a significant number of females in the partnerships," Lagarde said at the World Economic Forum in January.

That reluctance in the corporate world — to adjust to changing gender dynamics — was well and truly on display Wednesday after the law was announced.

According to Bloomberg, BMW criticized the law, saying while it believed in striving for more gender diversity in its workforce, the "company doesn’t believe in quotas.”

It's worth noting Merkel herself had been against quotas until recently, striking down a proposal in 2011 that would have implemented the same quota — 30 percent — the new law hopes to achieve. (Video via Channel 4)