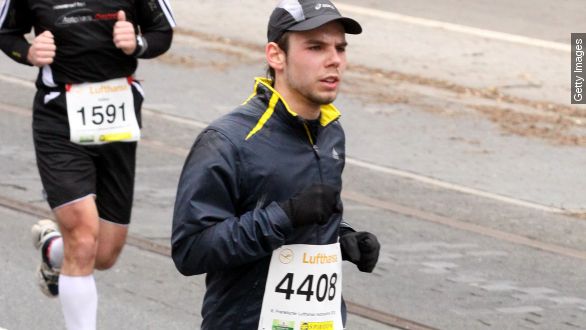 SMS
Germanwings Co-Pilot Might Have Practiced Descent
By Jake Godin
By Jake Godin
May 6, 2015
A report by French investigators has revealed the co-pilot of the crashed Germanwings plane from March may have rehearsed the move on another flight.
SHOW TRANSCRIPT

A new report from French investigators suggests Andreas Lubitz, the Germanwings co-pilot who officials believe flew his plane into the French Alps on purpose, may have practiced the move on an earlier flight. (Video via French Interior Ministry)

The report looks at a specific 4.5-minute period during the previous flight, which flew from Düsseldorf, Germany, to Barcelona. As was the case during the actual crash, the captain was absent in the cockpit.

In that time, data from the plane's black box shows Lubitz made several attempts at bringing the plane's altitude to 100 feet before correcting the altitude.

The captain once again stepped out on the plane's return trip to Düsseldorf later in the day, leaving Lubitz alone. But instead of practice dips, officials say Lubitz flew the plane directly into the mountain, killing all 150 people on board.

While the report doesn't give any possible explanation for the data, one source close to the investigation told German newspaper Bild there "was no aeronautical reason" for the descent.

In its report, the BEA listed six other accidents dating back to 1982 where the crash was seemingly caused deliberately. The most recent was a Mozambique flight which crashed in Namibia in 2013.

The exact reason why Lubitz might have crashed the plane is unclear, though reports say he suffered from depression. (Video via French Interior Ministry)

With the plane's crash still under investigation, the BEA report says it's looking into both how it can better balance medical information and flight safety as well as improving cockpit security.