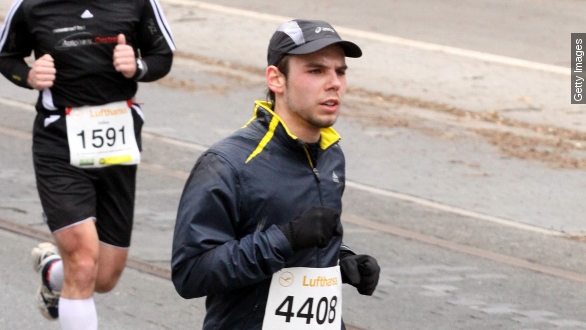 SMS
Germanwings Co-Pilot Might Have Hidden Illness From Employer
By Jake Godin
By Jake Godin
March 27, 2015
The Germanwings co-pilot accused of deliberately crashing a plane into the side of a mountain might have hidden an illness from his employer.
SHOW TRANSCRIPT

Authorities have more questions concerning the crash of Germanwings Flight 9252 in the French Alps after searching the home of the plane's co-pilot. (Video via French Interior Ministry)

Investigators are saying Andreas Lubitz, seen here running a marathon in 2010, deliberately crashed Flight 9252 into the side of a mountain earlier this week after reportedly locking the other pilot out of the cockpit. All 150 on board, the majority of which were Germans and Spaniards, are believed to have died.

On Friday, prosecutors announced they had found evidence inside Lubitz's apartment that the 28-year-old might have been hiding an illness from his employers.

Prosecutor Christoph Kumpa said a letter found in Lubitz's trash indicated he "was declared by a medical doctor unfit to work." Also found were torn-up medical certificates, though it's not clear what they were for.

Although much has been made of a family friend's comments to a German newspaper that Lubitz had previously had "a burnout, a depression," a hospital that treated Lubitz in February and March has reportedly said it was not for depression.

The CEO of Lufthansa, the company that owns Germanwings, told CNN that Lubitz had passed all the required mental and physical fitness tests for becoming a pilot.

French police searching the crash site say they have yet to find an intact body. According to French news station BFMTV, police are using DNA samples from family members to identify the remains they are finding. (Video French Interior Ministry)

In reaction to the crash, the European Aviation Safety Agency has started recommending that there always be two people in a plane's cockpit at any time. Lufthansa has gone a step further and started requiring it.