Germans Celebrate 25 Years Since The Fall Of The Berlin Wall 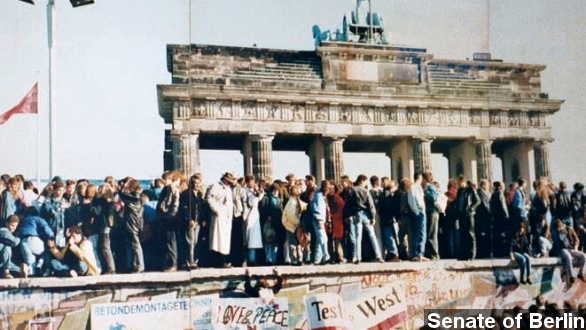 SMS
Germans Celebrate 25 Years Since The Fall Of The Berlin Wall
By Nathan Giannini
By Nathan Giannini
November 7, 2014
Artists in the German capital are marking the anniversary with 8,000 illuminated balloons along the former border.
SHOW TRANSCRIPT

Nov. 9 marks 25 years since the fall of the Berlin Wall. Artists in the German capital are marking the anniversary with 8,000 illuminated balloons along the former border.

According to NBC, the "Lichtgrenze," or "Light Border," will run for 10 miles through the city, passing iconic landmarks such as Checkpoint Charlie and the Brandenburg Gate.

In the aftermath of World War II, the city was split into two parts — the capitalist West and communist East. In 1961, East German officials began construction on the wall that would completely close the border between the two.

CNN: "Berliners awoke to a barbed-wire fence surrounding the western part of the city. A barrier to contain East Germans hungry for the lifestyle of the West. Overnight families were split."

In the following 28 years, at least 138 people were killed near the wall, the majority of them East Germans attempting to flee to the West.

Sunday marks 25 years after the opening of the border was announced, though the wall itself wasn't immediately demolished.

Over the next few weeks, people would chip away at the wall, creating unofficial border crossings. The official dismantling began in June 1990.

Sunday evening those luminous balloons will be released into the air. There will also be movie screens and information panels along the former border.