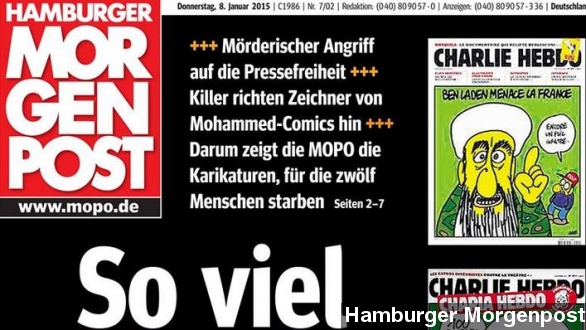 Authorities say no one was injured in the Sunday firebombing of a German newspaper. The arson comes days after the newspaper ran Charlie Hebdo cartoons.

Around 2 a.m. local time Sunday, the Hamburger Morgenpost reports it was the victim of an arson attack carried out by two men. The men allegedly threw rocks and then a burning object through the building's windows. The fire damaged some of the newspaper's archives, but no injuries were reported.

This is the front page for the newspaper Thursday, the day after the attack on the Charlie Hebdo office that killed 12. Three Charlie Hebdo cartoons appear on the side as the text reads, "This much freedom must be possible."

But it's still not known if the attack is related. According to Deutsche Welle, authorities are calling that the "key question" and say it's "too soon" to speculate.

Publications across Europe are on edge this week, wary of Charlie Hebdo copy cat attacks.

"Do you think journalists particularly, in addition to police officers are going to find themselves needing extra security," CNN anchor Robyn Curnow asked.

In 2011, the first time the Charlie Hebdo office was attacked, it was also firebombed. That was after the magazine jokingly made the Prophet Mohammed its guest editor-in-chief for an issue.

Two people have been arrested for the German firebombing, though police haven't released their names.