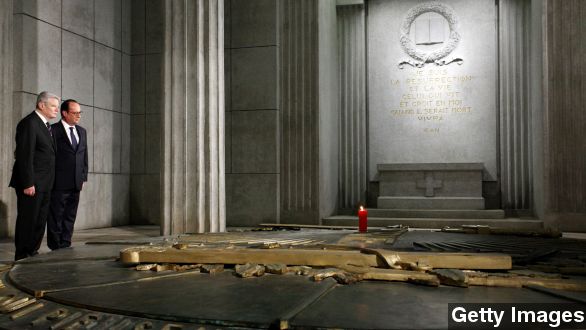 By Matt Picht
August 3, 2014
As Europe commemorates the centenary of World War 1, Germany's celebrations are noticeably more muted than those in Britain.
SHOW TRANSCRIPT

One hundred years ago, after a month of failed diplomacy and rising military mobilization, Britain declared war on Germany and the First World War officially became a global conflict. (Via John Warwick Brooke, U.S. War Department)

At least 16 million people lost their lives over the course of the Great War’s four brutal years. And politicians and nations across the globe are commemorating the war’s centenary with speeches, events, and memorials. (Via History Channel, Présidence de la République, Euronews)

But while no one can deny World War I’s historical impact, the war is being remembered much differently in the media across Europe.

British media are covering the war’s hundred-year anniversary in exhausting detail. There are in-depth timelines recounting the days leading up to the conflict, collections of historical artifacts, and thoughtful reflections on World War I’s modern legacy. (Via The Guardian, The Telegraph, BBC)

But that enthusiasm isn’t reflected in German media sites, who’ve kept their coverage of the anniversary simple and stuck mostly to the basic historical facts. (Via Die Welt, NDR, Deutsche Welle)

The disparity between the two countries' attitudes toward the Great War was thrown into sharp relief last year after British tabloids accused a German diplomat of asking Britain not to celebrate their victory in the war. The diplomat in question has strongly denied the story. (Via The Daily Express, Daily Mail)

As a country, Germany’s never been as focused as Britain on remembering the ravages of World War I. The Guardian reports Germany’s planning to spend just 4 million euros on memorial events — compared to the 60 million spent by the U.K. and France.

And historically poignant sites in the country are often neglected by Germans. The keeper of one graveyard full of Germany’s war dead told the BBC, “Nobody is interested. I'm sorry about it. The time is far away and nobody knows what these graves are for.”

But there’s also the sentiment, in Germany and across Europe, that it was the Kaiser’s militancy which sparked WWI. It’s a perspective embodied in the Treaty of Versailles’ War Guilt clause, which holds Germany accountable for the war’s damages. (Via Wilhelm Kuntzemüller, Imperial War Museums)

The Financial Times quotes one historian who wrote, “Because of the stigma of being the aggressor, Germany could not be proud of its fallen heroes like other nations.”

Residual guilt also easily explains the popularity in Germany of recent books like Christopher Clark’s “The Sleepwalkers,” which blames every nation equally for stumbling into a preventable war. (Via Penguin Books)

But another explanation for Germany’s reluctance to mention the war has to do with the Great War’s successor. As one German schoolteacher told The Spectator, Germany’s suffering during the Second World War often overshadows WWI.

"The traumatisation that followed from the second world war is ongoing and the guilt from that overwhelms any feelings about the other."