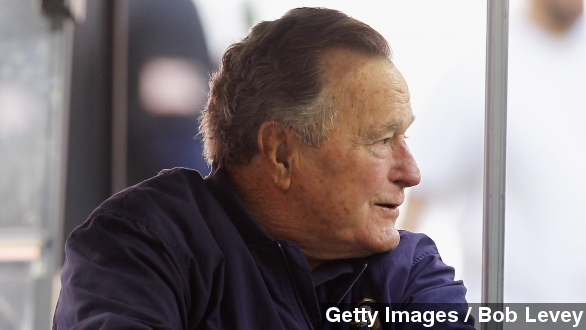 SMS
George H.W. Bush Hospitalized With Shortness Of Breath
By Cliff Judy
By Cliff Judy
December 24, 2014
The former president's spokesman emphasized he was hospitalized and kept for observation as a "precaution."
SHOW TRANSCRIPT

Former President George H.W. Bush went to a Houston hospital with shortness of breath Tuesday night, and doctors decided to hold him for observation as a precaution.

An ambulance took the 90-year-old former commander-in-chief to Houston Methodist Hospital. A spokesman emphasized this was all a precaution, but released very little other than that. (Video via KRIV)

This is the same hospital that treated Bush, Sr., in 2012 and 2013 for a bronchitis-related cough and other health issues. (Video via YouTube / Octaviation100)

The former president suffers from Parkinson’s and now uses a motorized wheelchair. (Video via PBS)

“He’s indomitable," Dr. Marc Siegel told Fox News. "I believe — and I’ve written a book on this — that when you have a spirit like his and the courage to overcome and everyone’s prayers are with him, the outcome is always better.”

Best of health to the former president, but as his chief of staff said in an email to Fox News downplaying the incident, “It's a hiccup.”