Geno Smith's Career Might Be More Broken Than His Jaw 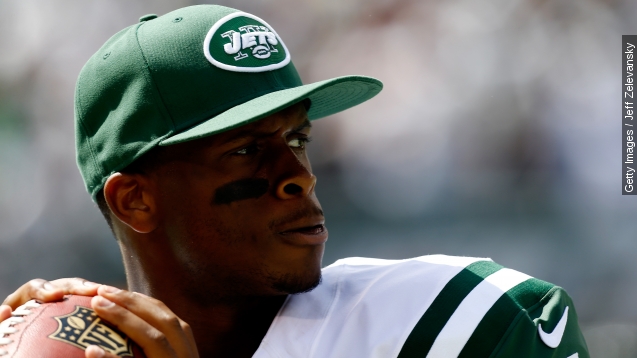 SMS
Geno Smith's Career Might Be More Broken Than His Jaw
By Matt Moreno
By Matt Moreno
August 12, 2015
The New York Jets quarterback will be out six to 10 weeks after a teammate punched him in the jaw, but broken bones might be the least of his worries.
SHOW TRANSCRIPT

Punches thrown may break Geno Smith's bones, but these words might hurt forever.

The New York Jets quarterback will be sidelined for six to 10 weeks after he was punched in the team's locker room Tuesday. Backup QB Ryan Fitzpatrick is expected to take over.

The problem for Smith, aside from the broken jaw, is no one seems to feel too sorry for him or the Jets franchise.

"For me, it's a lack of leadership on Geno Smith's part that he would put himself in harm's way to get sucker-punched," former NFL wide receiver Cris Carter told ESPN.

Add the franchise's lackluster history to the city's notoriously ruthless sports fans and media, and it's easy to see how athletes get chewed up and spit out of the Big Apple. (Video via Fox Sports)

It seems like Jets head coach Todd Bowles is the only one in Smith's corner.

"Geno's the first team quarterback. It's Ryan [Fitzpatrick]'s job to take it. It's Geno's job to lose it. If Geno doesn't lose it and Ryan doesn't take it, he's the starter," Bowles told media in June.

But now, even that confidence seems to be wavering.

"The whole thing was childish. It was tit-for-tat. It was he said she said and some high school stuff that they could have handled better than they handled it," Bowles said in a press conference Tuesday.

Bowles has since said there's no guarantee Smith, a No. 39 pick in the 2013 NFL draft, will start when he returns, especially if Fitzpatrick plays well.

This video includes images from Getty Images and music from unreal_dm / CC BY 2.5.