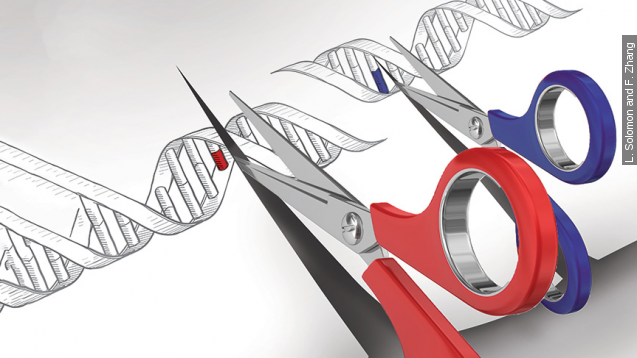 SMS
Gene Editing Tool CRISPR Is Making Scientists Face The Hard Questions
By Steven Sparkman
By Steven Sparkman
December 31, 2015
The CRISPR-Cas9 tool makes genetic engineering cheap and easy, making it a powerful tool that has the potential to be abused.
SHOW TRANSCRIPT

You might not have heard about it yet, but the story that made the most waves in the scientific community over the last year was undoubtedly the CRISPR-Cas9 gene editing tool. (Video via University of California, Berkeley)

The tool, usually just called CRISPR for short, is able to manipulate DNA with more speed and accuracy than any gene editing technique that's come before it.

In fact, it's so fast, so cheap and so easy to use it has a lot of scientists worried. Now, just about any lab can carry out its own genetic engineering experiments.

The technique comes from a system bacteria used to fight off viruses. With a few tweaks, scientists have been able to program that system to seek out specific strands of DNA, cut them, and then add or remove sequences. It's like a text editor for DNA. (Video via Massachusetts Institute of Technology)

That kind of precise gene editing is powerful. It could potentially cure genetic diseases, it might eventually lead to cures for cancer and it can work on any living thing.

"We know the mutation that can render an individual resistant to HIV. ... One therapeutic strategy is to simply take out the cells from an HIV-positive patient, make the mutation ... and then they should be no longer susceptible," CRISPR co-creator Feng Zhang told the MIT Technology Review.

It could also help scientists nail down the ins and outs of genes. Want to know what a particular mammal gene does? Cut it out from the DNA of a mouse or rat embryo, raise the animal to adulthood and see what's different about it.

But there's nothing limiting scientists to just research and medicine. The same technology could also allow people to choose traits they want in themselves or their children.

"[People] who have the financial means to tell companies, 'Can you please create a CRISPR drug and make me more muscle, make me smarter, make my eyes green?'— eventually, it's all going to be technically feasible," Ronald Cohn of Toronto's Hospital for Sick Children told the CBC.

Because CRISPR has become so widely used, it's hard to keep tabs on who is doing what with it. So someone somewhere was bound to tamper with human DNA sooner or later. (Video via University of California, Berkeley)

That's exactly what happened. In April 2015, scientists at China's Sun Yat-sen University announced they had already experimented with using CRISPR to correct a blood disorder in nonviable human embryos.

You could almost see the wave of panic after that. Governments and scientific organizations raced to set policies on CRISPR's use in humans, and its creators asked other scientists to put the brakes on. (Video via House Committee on Science, Space and Technology)

"I and my colleagues have called for a global pause in any clinical application of the CRISPR technology in human embryos," CRISPR co-creator Jennifer Doudna said during a TED talk.

The fear is that a gene created using CRISPR could be passed down from one generation to the next and then the next. Basically, the engineered gene would become part of human evolution, and there's now a global debate over whether that should ever be allowed.

We may not get a consensus for a while. There are ethical issues with editing human DNA — and there are also issues with choosing not to, as one woman who lost her newborn son to a birth defect made clear at a recent summit.

"He was 6 days old and he suffered. ... If you have the skills and the knowledge to fix these diseases, then frickin' do it," Sarah Gray said at a summit of The National Academies of Sciences, Engineering and Medicine.

Scientists, ethics experts and policymakers are expected to hammer out guidelines over the next year that will set standards for using CRISPR on humans.

This video includes images from the U.S. Department of Energy.