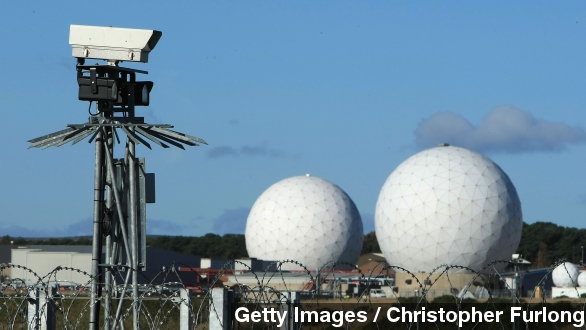 SMS
GCHQ Calls For Wider Government Access To Internet Data
By Jake Godin
By Jake Godin
November 4, 2014
The director of the U.K.'s GCHQ has condemned Internet companies for what he believes is a disregard for terrorists using their networks.
SHOW TRANSCRIPT

Ever since Edward Snowden leaked thousands of classified surveillance documents in 2013, government intelligence organizations have been on the defensive. Now, it appears, they are on the offensive.

Robert Hannigan, the newly appointed director of the U.K.'s Government Communications Headquarters, wrote a scathing piece for The Financial Times about how Silicon Valley companies are handling Internet privacy in light of terrorism.

GCHQ scours the Internet for anything it deems a potential threat to national security. Pretty much, it's the U.K.'s version of the NSA.

To Hannigan, the platforms have become the "command-and-control networks of choice for terrorists and criminals" and some tech companies seem to be in denial about how their platforms are being misused.

Platforms such as Twitter and YouTube do allow users to flag content as inappropriate to get it taken down, which has been done with ISIS accounts and videos. But for Hannigan, that simply isn't enough.

His solution? Tech companies need to open up more to government agencies and allow them greater access to their data. And that's a big issue in a post-Snowden Internet era.

When Snowden leaked documents revealing the widespread invasion of privacy by government intelligence organizations, Internet companies largely sided with consumers in acknowledging the importance of privacy. (Video via The New Yorker)

Transparency reports became almost necessary to maintain customer trust, with sites such as Google and Facebook detailing almost every request for information made by governments around the world.

Reactions to Hannigan's op-ed have been varied online, with some saying more surveillance is for the greater good and others championing a free and open Internet. Here's an analyst for a U.K.-based think tank, for example.

CARL MILLER VIA BBC: "We're really one step away from members of ISIS sending tweets to all of us, telling us that we're going to be next. This is a new kind of way of spreading terror. This is new way of spreading propaganda, which we do have to counter."

Compare that to what Eric King of Privacy International told The Guardian in response to Hannigan's article:

"GCHQ’s dirty games – forcing companies to handover their customers’ data under secret orders, then secretly tapping the private fibre optic cables between the same companies' data centres anyway – have lost GCHQ the trust of the public, and of the companies [whose] services we use."

For now, as a BBC technology editor notes, if governments want to access data with Silicon Valley's assistance, they're going to have to do it on the companies' terms, and that means no back doors.