Gay Marriage Ruling Could Hinge On Roberts And Kennedy 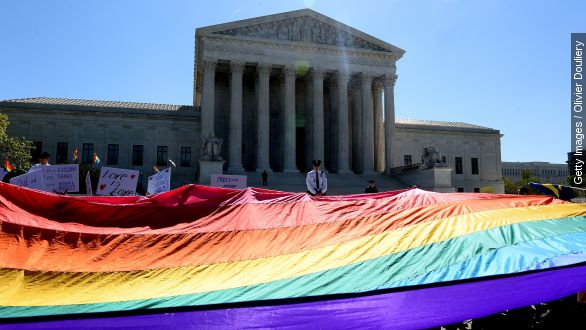 It's been nearly two years since the U.S. Supreme Court issued its landmark ruling on gay marriage.

And a lot has changed since then. When the ruling came down, 13 states allowed gay marriage, plus the District of Columbia. Today, 36 states do. The issue before the court now is whether the remaining states must recognize it as well.

1. Is same-sex marriage a constitutional right that all states must observe?

2. If the answer is no, will states that don't allow same-sex marriage have to recognize marriages performed in other states?

The deciding votes will likely come down to Chief Justice John Roberts and Justice Anthony Kennedy. But even after an hour and a half of oral arguments Tuesday, it's hard to tell which way they're leaning.

At one point, Kennedy seemed to offer support for the traditional definition of marriage.

"This definition has been with us for millennia. And it's very difficult for the Court to say, 'Oh, well,­ we know better,'" Kennedy said.

But then later, you get the sense Kennedy thinks same-sex couples are entitled to the same rights as heterosexual couples.

"And then I don't understand this not dignity bestowing. I thought that was the whole purpose of marriage. It bestows dignity on both man and woman in a traditional marriage," Kennedy said.

"It's dignity bestowing, and these parties say they want to have that —­­ that same ennoblement," Kennedy said.

As for Roberts, he voted against gay marriage two years ago, but his questioning Tuesday suggested he may have changed his position since then.

"If Sue loves Joe, and Tom loves Joe, Sue can marry him, and Tom can't. … Why isn't that a straightforward question of sexual discrimination?" Roberts asked.

The decision, which is expected sometime in June, could go a few different ways. If the court does decide same-sex couples have a constitutional right to marry, that would invalidate the current bans on gay marriage.

This video includes images from Getty Images and the U.S. Supreme Court.