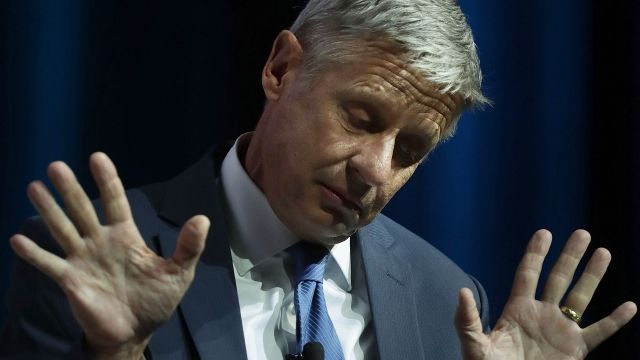 "I guess I'm having an Aleppo moment," Johnson replied.

When you make a mistake in politics, you essentially have two options: Admit the gaffe and try to do better, or spin the blunder to make it look positive. Gary Johnson is going with the second option.

"OK, so I point out an elected leader, a foreign leader, that I admire, and then all of a sudden I've got to defend them against things that I'm not even aware of," Johnson said on CNN.

Johnson implied on Twitter that the slip happened because no world leaders measure up to his lofty standards — not because he doesn't know about foreign policy.

The Libertarian party presidential nominee said his inability to recognize foreign leaders and conflicts is a plus for Americans, arguing that you can't send troops to a place you aren't aware of.

"The fact that somebody can dot the i's and cross the t's on a foreign leader or a geographic location then allows them to put our military in harm's way," Johnson said on MSNBC.

We've never been in a war room, but it's safe to assume that even if the president's clueless, someone in the room would have enough of a grasp on basic geography to figure out where to send our troops.

Johnson's statement mimics the foreign policy plan laid out on his website. He wants stay out of everyone else's disputes and focus on domestic policy. But it's not that easy.

There are more than 200,000 active duty U.S. troops stationed overseas in more than 150 countries, each with its own complex, pre-existing relationship with the U.S. government. The next president is going to have to deal with those relationships.

The commander-in-chief also has to interact with world leaders all the time to strengthen trade and diplomatic ties, not just for military conflicts. When you're in those meetings, it can't hurt to know who you're speaking with.

At this point, Johnson's campaign needs as many PR wins as it can get. Johnson already missed out on the first debate, and he's admitted his campaign is doomed if he can't boost his poll numbers.