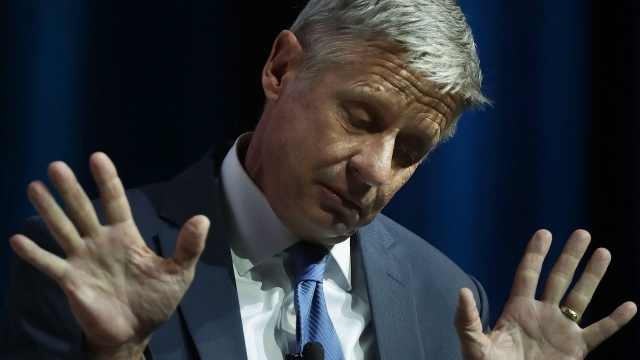 SMS
Gary Johnson Did Not Do His Campaign Any Favors When He Said This
By Lindsey Pulse
By Lindsey Pulse
September 8, 2016
The Libertarian presidential candidate appeared on MSNBC's "Morning Joe." When asked about Aleppo, he didn't know what it was.
SHOW TRANSCRIPT

"What would you do, if you were elected, about Aleppo?" Mike Barnicle said.

"And what is Aleppo?" Gary Johnson asked.

That's Libertarian presidential candidate Gary Johnson. And he's getting a lot of attention for that question.

But Johnson wasn't quite sure what the seasoned journalist was referring to when he asked about Aleppo.

"Aleppo is in Syria," Barnicle said. "It's the epicenter of the refugee crisis."

Johnson caught his bearings with an "OK, got it," but it was too late. The hosts of "Morning Joe" dug in.

Joe Scarborough asked if Johnson thought foreign policy was "so insignificant," that it's OK for a presidential candidate to not know "what Aleppo is, where Aleppo is, why Aleppo is so important"?

Here's a refresher for you: The city of Aleppo has seen some of the worst of the Syrian crisis. It's become a war-torn battleground in the country's civil war and a nexus of the refugee crisis.

Some are saying Johnson's run is doomed after this misstep. Johnson reportedly said after the interview that he was "incredibly frustrated" with himself.

The campaign has since released a statement. Johnson explained when he was asked about Aleppo, he thought of an acronym, not the Syrian conflict. The statement says, in part: "I blanked. It happens, and it will happen again during the course of this campaign."