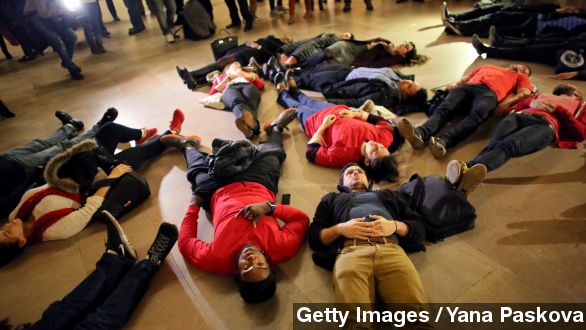 SMS
Garner Reactions Differ From Ferguson, Cross Political Lines
By Christian Bryant
By Christian Bryant
December 3, 2014
Reaction to the Ferguson grand jury decision split largely along political lines, media on both the left and right have issues with the Garner ruling
SHOW TRANSCRIPT

It didn’t take long for the Department of Justice to announce a civil investigation into the chokehold death of Eric Garner at the hands of New York police.

And protestors took to the streets just as quickly as the DOJ made its announcement. Midtown Manhattan, the scene of what was supposed to be a night devoted to this year’s annual Christmas tree lighting, turned into a demonstration platform.

Some of the same chants from Ferguson protests were also used by New Yorkers. But, unlike Ferguson, reaction to this case has been much more unified across the political divide.

But the decision from the New York grand jury not to indict Officer David Pantaleo drew similar reactions from liberals and conservatives.

"The grand jury’s decision is totally incomprehensible. It looks as if, at least, they might've indicted him on something like involuntary manslaughter — at the very least," Fox News commentator Charles Krauthammer said.

"People want reform. This is not against police. This is bad police. Only way to protect good police is to take the bad out," Reverend Al Sharpton said.

That might be because of the video that shows New York City police placing Garner in a chokehold, a move the NYPD explicitly banned more than two decades ago.

"Videos change behavior as much as they do anything else. … It also changes people’s sense of outrage."

But what's more, the case also highlights how the public — including members of the media — and the police have very different views on what it means to resist a police officer.

CNN's Erin Burnett said, "It really accelerated very quickly. There was a conversation. He's kind of saying, 'Leave me alone, you guys are always picking on me.' … Appropriate use of force?"

Former NYPD Detective Harry Houck answered, "Certainly, because what he's doing now is he's resisting arrest. When a police officer tells you you're under arrest, you are supposed to comply."

Fox News’ Megyn Kelly said, "How do you get that he was resisting? We’ve asked producers to slow it down so we can see what the police are talking about."

Former New York City Police Commissioner Bernard Kerik replied, "I don’t see what you’re looking at, but, at the end of the day, the officer says you’re under arrest. … They have the right to use force to affect that arrest."

Both Officer Pantaleo and the family of Eric Garner spoke out about the grand jury's decision Wednesday. Pantaleo apologized to the family, saying he never intended to kill Garner and offered his condolences. Garners wife said she could care less for his apology.