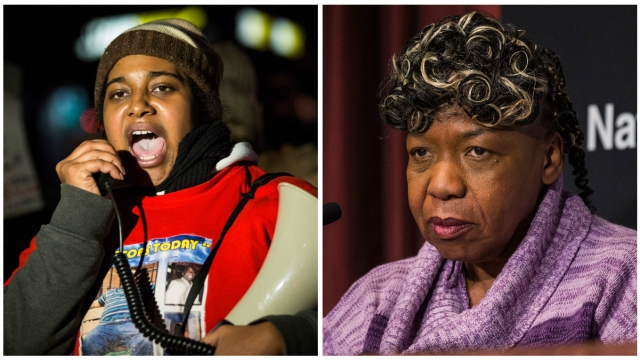 By Christian Bryant
April 20, 2016
The mother and daughter of Eric Garner have endorsed different candidates for president, evidence of the rift between younger and older black voters.
SHOW TRANSCRIPT

Eric Garner's family has stood in solidarity against police violence since his death at the hands of NYPD officers.

But the Garner family is divided in at least one area.

"I'm behind anyone who's going to listen and speak up for us. ... And that's why I'm for Bernie," Erica Garner said in an ad for Bernie Sanders.

Gwen Carr and Erica Garner (that's the mother and daughter of Eric Garner respectively) have opposing views about which Democratic candidate should earn their party's nomination. And the Garner family's differing views reflect a generational rift with black voters throughout the country.

Some of Sanders' popularity among young black voters could be explained by Hillary Clinton or Bill Clinton's interactions with Black Lives Matter protesters, or Hillary Clinton's perceived pandering, or maybe even the 1994 Crime Bill, which was passed during the Clinton administration.

Hillary Clinton has apologized for her support of that bill.

"I'm sorry for the consequences that were unintended and that've had a very unfortunate impact on people's lives," Clinton said during a Democratic debate in Brooklyn, New York.

And it's not something that's keeping older African Americans from voting for her.

This video includes clips from MSNBC, Bernie 2016, ABC, WWPR and CNN and images from Getty Images.