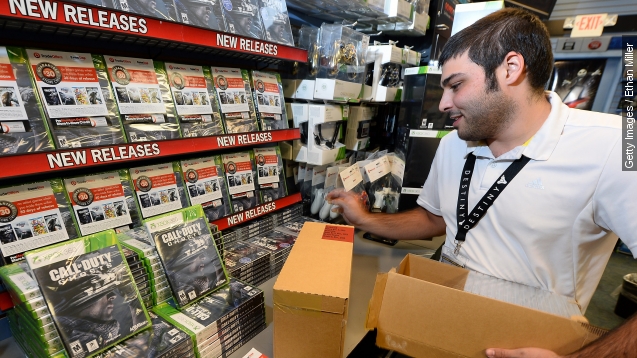 SMS
Gamestop Refuses To Die Like Blockbuster And Borders
By Leah Becerra
By Leah Becerra
August 30, 2015
Unlike other companies that succumbed to a changing market, Gamestop is fighting to stay healthy.
SHOW TRANSCRIPT

As game sales go digital, Gamestop is determined not to die off and become a fossil in the "remember when?" hall of fame. And it's actually working.

The company reported its Q2 earnings Thursday, which were good but not great. Sales of new products were down, while used and value sales were up. The biggest gain was in the mobile and consumer electronics category, which grew by 26.9 percent.

The company also wrapped up its acquisition of Geeknet, which operates the Amazon of all things geek: ThinkGeek.com. And based on the relative gains of the second quarter, Gamestop adjusted its own estimates for the rest of the year a bit higher.

And they weren't the only ones. Some analysts have started recommending the company's stock as a good buy for investors, setting the stock's target as high as $60 per share.

The reason for Gamestop's recent success is simple: the company's not relying on our nostalgia for survival.

That was a mistake that killed other stores, like Blockbuster and Borders: stores that did eventually dabble in newer types of services, but just flat out got into the game too late.

By contrast, Gamestop's not blindly relying on its traditional brick-and-mortar, new game and hardware selling business. Last year, it made that abundantly clear when it said it planned to close at least 120 stores.

The company now has a lot of money invested in other types of services and brands, like Game Informer, Kongregate, Simply Mac and Spring Mobile stores.

Even the recent purchase of Geeknet represents a huge shift away from how we remember the company: the place where we go to get our hands on the latest games. (Video via ThinkGeek)

But just because Gamestop's familiar store isn't the biggest earner in the portfolio doesn't mean it's going away. The company's new endeavors can afford to keep Gamestop stores around in a more slimmed down capacity.