'Game Of Thrones' Is The Most Pirated Show On Earth 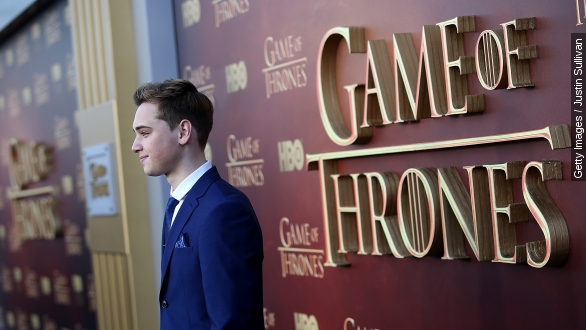 SMS
'Game Of Thrones' Is The Most Pirated Show On Earth
By Jasmine Bailey
By Jasmine Bailey
April 10, 2015
As the season five premiere of "Game of Thrones" approaches, piracy of the show skyrockets. More than 7 million people have illegally downloaded it.
SHOW TRANSCRIPT

Season five of HBO's "Game of Thrones" airs Sunday, and possibly in an effort to catch up on the show before the new premiere, illegal downloads have skyrocketed in recent weeks.

We're talking a 45 percent jump from last year, with more than 7 million downloads since Feb. 5. Compare that to 4.9 million in the same time last year.

Those numbers come from anti-piracy company Irdeto — showing "Game of Thrones" to be the most pirated show in the world. Of the findings, Iredto's vice president says: "Piracy is a tidal wave that cannot be controlled, only managed. There is a culture of 'free' where many people believe that it is acceptable to pirate these TV shows if they don't have access to them through legal means."

One of those ways to manage piracy is by offering alternatives that people will pay for — for instance, HBO Now.

The stand-alone streaming service launched earlier this week, and for $14.99 a month, customers of Apple or Cablevision Systems Corp. can binge on about 2,000 different HBO titles.

But as that literally just became available, HBO Now hasn't had its chance to prove if it will be a sustainable way to fight piracy.

Among the list of top countries illegally downloading "Game of Thrones" was Australia. This comes just as news of a piracy crackdown in the country.

More than 4,000 people there were found to have illegally downloaded the movie "Dallas Buyers Club" using BitTorrent.

In a landmark ruling, the Federal Court of Australia has ordered six Internet service provider firms to release the names and physical addresses tied to the IP addresses that downloaded the film. Those who illegally downloaded the film will then have to provide compensation to Dallas Buyers Club.

Other shows Irdeto found to be popular on the piracy scene include "The Walking Dead," "Breaking Bad," "Vikings" and "House of Cards."

"Game of Thrones" will premiere around the globe at the same time this year in an effort to stop piracy. It will air at 9 p.m. on Sunday in New York, which translates to 2 a.m. Monday in London, 9 a.m. in Hong Kong and noon in Auckland.