Is The Gadsden Flag Racist? That's Up To The Government 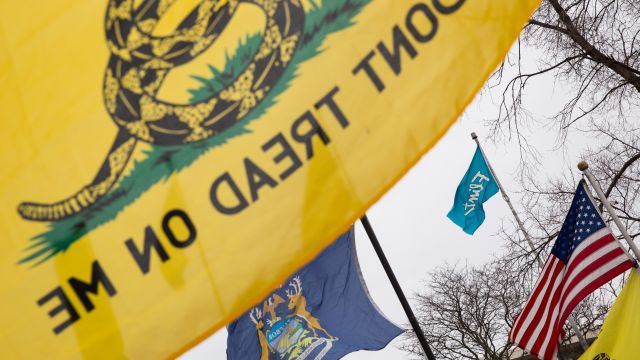 SMS
Is The Gadsden Flag Racist? That's Up To The Government
By Matt Picht
By Matt Picht
August 5, 2016
The Equal Employment Opportunity Commission is investigating whether displaying the Gadsden flag at work could be racial harassment.
SHOW TRANSCRIPT

What makes a symbol racist? That's a question the Equal Employment Opportunity Commission is currently mulling over. And at the heart of the question is the iconic Gadsden flag.

Originally a military symbol during the Revolutionary War, the Gadsden flag is better known these days as a symbol of resistance to big government. It's been adopted by a number of right-wing movements.

But for one worker, the flag's new usage is also a "historical indicator of white resentment against blacks." That worker told the commission his co-worker's cap, embroidered with the flag's design, amounted to racial harassment.

The agency hasn't come to a decision about the complaint yet, but similar arguments against the Confederate flag have been upheld in the past. Right now, the agency is investigating the context of the case.

For Eugene Volokh, the law professor who brought this case to the public's attention, labeling the Gadsden flag as harassment would be an unfair government imposition on political speech, turning harassment laws into a "content-based, viewpoint-based speech restriction."

Politically-based harassment is still harassment, of course, but whether the Gadsden flag crosses the line from statement to slur is apparently up to the government to decide.