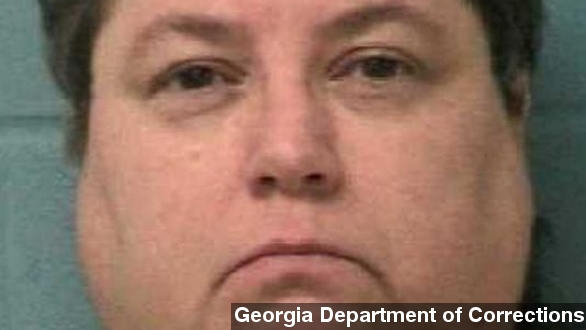 Kelly Renee Gissendaner is the only woman on death row in the state of Georgia. She'll soon become the first woman to be executed there since 1945.

Men make up the overwhelming majority of prisoners on death row. According to the NAACP Legal Defense Fund, women made up less than 2 percent of the U.S. death row population as recently as fall 2014. (Video via National Geographic)

Gissendaner was convicted in the 1997 murder of her husband. Prosecutors say she recruited her boyfriend, Gregory Bruce Owen, to kill him. Owen testified against Gissendaner in a plea deal.

Lena Baker was the last woman executed in Georgia, in 1945. She was convicted in the murder of her employer but argued he had imprisoned and threatened to kill her. Like Gissendaner, Baker was a mother of three.

The state pardoned her 60 years after her execution, and her story became the plot of a movie.

Gissendaner's legal team made a last-ditch effort to save her Tuesday night, but it was unsuccessful. An all-male Board of Pardons and Paroles denied clemency.

According to Gwinnett County DA Danny Porter, Doug Gissendaner was beaten with a billy club, "stabbed and left to die in the woods." Kelly Renee Gissendaner doesn't deny her role in orchestrating her husband's murder.

She was set to die by lethal injection Wednesday night, but that was rescheduled to Monday, March 2.