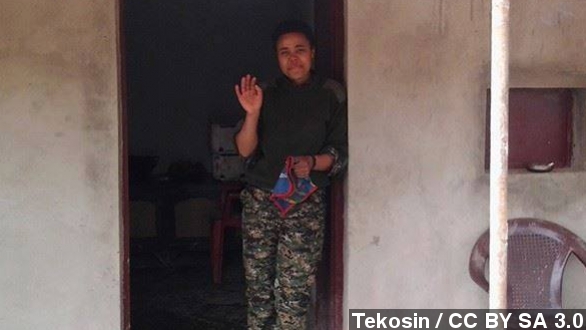 Much has been made of people leaving the U.S., Europe and other Western countries to join ISIS.

But in Duisburg, Germany this weekend, thousands gathered to commemorate a German woman who had fallen fighting the terrorist group. (Video via YouTube / Linkes Forum)

Although she is the first known Western woman to have died fighting the group, she was one of possibly 100 Western volunteers who've joined the effort against them. (Video via CNN)

That estimate comes from the BBC, which has reported extensively on British volunteers, including a former Royal Marine who died in fighting earlier this month.

And although many of the volunteers who have been interviewed cite ISIS' atrocities as their main reason for joining the fight, their specific motivations seem diverse. (Video via CBS)

Some, like this 28-year-old Detroit native who spoke to ABC, cited religious reasons.

While others, like Hoffman, joined for political reasons. She was a member of Turkey's Marxist-Leninist Communist Party, which has reportedly been sending volunteers to fight for the Kurds.

Not everyone makes it to the battlefield in the first place, though: British authorities this week arrested a woman who was allegedly trying to join a Kurdish militia the European Union recognizes as a terrorist group. (Video via Al Jazeera)

This video includes an image from PPCC Antifa / CC BY NC SA 2.0.