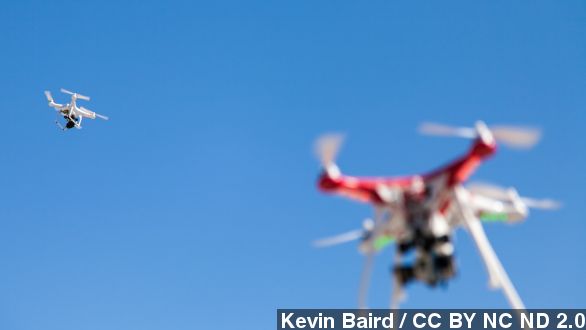 SMS
Frustration As Drone Industry Outpaces Regulation In U.S.
By Evan Thomas
By Evan Thomas
September 14, 2014
U.S. firms worry they’re falling behind in the marketplace as the FAA considers how to regulate commercial drones.
SHOW TRANSCRIPT

When it comes to commercial drones, the U.S. appears to be stuck in hover.

It's easier than ever to spot the unmanned aircraft in the skies — but they’re all recreational vehicles. Anyone wanting to use drones in potential moneymaking operations in the U.S. is still out of luck.

The Federal Aviation Administration has yet to issue regulations on the use of commercial drones, which means U.S. businesses can’t so much as test unmanned aerial vehicles outside of six FAA-approved sites. (Video via CBS)

Now, there are suggestions the country could stand to lose out as a result. At GigaOM, writer Jeff John Roberts points to Canada’s drone business model as one example:

“In Canada, anyone that wants to use a drone for commercial purposes simply asks the country’s aviation regulator for a permit to do so and, in most cases, receives one in 10 to 20 business days.”

Roberts suggests Canada now has a commanding lead in the nascent drone economy — but it’s not for lack of U.S. businesses showing interest. Amazon made a stir with its prime air shipping prototype last year, for example; and Google unveiled its own unmanned delivery drones just a couple weeks ago.

And this week the Los Angeles Times profiled farmers who are ready and waiting to deploy drones in what’s known as precision agriculture — for mapping, research and targeted crop dusting.

To hear the industry tell it, the problem is the FAA’s perceived foot-dragging. Recent headlines would suggest a degree of frustration.

In a letter to the FAA earlier this year, the Association of Unmanned Vehicle Systems International and 31 other industry groups got right to the point.

"We cannot afford any further delays. The technology is advancing faster than the regulations to govern it. The current regulatory void has left American entrepreneurs and others either sitting on the sidelines or operating in the absence of appropriate safety guidelines.”

The FAA is working on rules for commercial UAVs — its test site rollout last year was part of that process — it’s just taking longer than expected.

And NASA is helping out, too. It’s looking for partners interested in developing standardized management for drones — an air traffic control system it could then hand off to the FAA.

The agency is working with AirWare and other companies to build software that would impose order on an increasingly busy unmanned airspace.

The FAA expects to have proposed rules for commercial drones in place by the end of the year.