From Bad To Worse: Fighting In Yarmouk Endangering Refugees 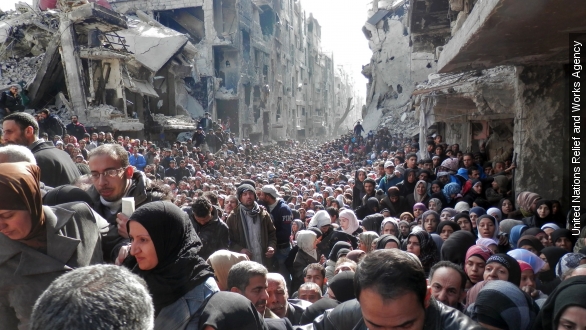 SMS
From Bad To Worse: Fighting In Yarmouk Endangering Refugees
By Jake Godin
By Jake Godin
April 4, 2015
Clashes over control of the Damascus refugee camp of Yarmouk not only pits rebel groups against one another but also endangers Palestinian refugees.
SHOW TRANSCRIPT

In Yarmouk, it’s Palestinians vs. everyone else.

Palestinians in a refugee camp in southern Damascus are caught in the middle of intense clashes between ISIS, Syrian rebels and the Syrian regime. (Video via Spring Revolution)

ISIS entered the camp on April 1 and appears to be cooperating with defectors from the Al Qaeda-linked Jabhat al-Nusra group in battling Palestinian rebel forces defending the camp over its control.

Although the ISIS fighters were initially repelled, they re-entered the camp Friday and now reportedly control up to 90% of the refugee district, according to the Syrian Observatory for Human Rights.

While many of the militant groups which operate out of Yarmouk are Palestinian, their allegiances vary. Some remain loyal to Assad, some have aligned themselves with the FSA — or Free Syrian Army — and others follow their own strict Islamist ideologies.

Further complicating the situation, the Syrian regime has reportedly been shelling the area with tanks and ground-to-ground missiles.

While regime, jihadist and rebel forces vie for control over Yarmouk, conditions for the thousands of refugees stranded there continue to deteriorate.

Currently, the United Nations says Yarmouk is home to about 18,000 Palestinian refugees. Once inhabited by some 150,000 refugees, Syria’s 2011 uprising and the subsequent siege on the camp by regime forces have caused tens of thousands to flee. (Video via United Nations Relief and Works Agency)

"I had described Yarmouk as a hell hole that shames the world and in the last days it has descended further," Gunness said.

The territory ISIS controls near Damascus doesn’t connect to its large swath of territory in the rest of Syria. But if ISIS gained a foothold in Yarmouk, it would move its current enclave closer to the center of Syria’s capital city than where it currently sits in a neighborhood further south.

Speaking to the Middle East Eye, one local journalist says militant groups are more concentrated on fighting each other rather than the regime, leaving the blockade in place and making civilians the "number one victim." (Video via SMART News Agency)

Newsweek spoke to an intelligence analyst at The Levantine Group who said that, with an uptick in clashes, Syrians and Palestinians in Yarmouk will likely join either rebel groups or even Assad’s regime over ISIS. (Video via YouTube / AL-yarmook Camp)

Yarmouk was initially built for Palestinians fleeing the 1948 Arab-Israeli war and is considered an unofficial refugee camp by the United Nations.