Friday's Lunar Event Happens Once In A Blue Moon 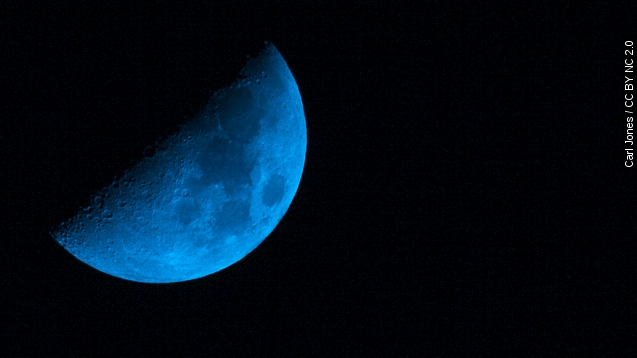 SMS
Friday's Lunar Event Happens Once In A Blue Moon
By Ryan Biek
By Ryan Biek
July 30, 2015
Don't miss Friday's blue moon. You won't get a chance to see another until 2018.
SHOW TRANSCRIPT

Look up at the sky Friday night, and you'll see a moon so rare, it lives up to that old saying.

Okay, so you won't actually see a blue moon Friday night — more like a whitish-gray one.

Still, it's pretty rare. If you miss this year's, you won't see another until January 2018. While each month usually has only one full moon, a blue moon is a second, sneaking its way in.

The cause is really just the difference between the lunar calendar and the solar one that months are based on.

And while Friday's moon may not necessarily be blue, NASA says moons can actually appear blue.

The secret lies with volcanic eruptions and forest fires. Specifically, the ash they release into the sky; each can be a millionth of a meter in size. (Video via National Geographic)

That's about the same size as red light on the electromagnetic spectrum, making the ash particles perfect for scattering red light and letting blue and green reach our eyes.

Something similar happens when the moon sits low on the horizon, only in this case, the moon looks red.

Just like volcanoes or forest fires, other particles in the air can also affect the color. Except in this case, those particles match the size of the wavelength of blue light and filter it out.

Be sure to check out the "blue moon" on Friday — even if it is white. You won't see something like this again for two and a half years.