'Frenemies' Trump And Cruz Fight It Out Over Cruz's Citizenship 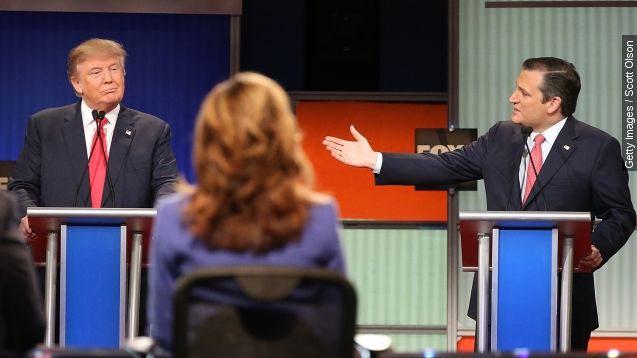 "On the issue of citizenship, I'm not going to use your mother's birth against you," Sen. Ted Cruz replied.

"Because it wouldn't work."

After a week of trading barbs about Cruz's citizenship ...

the two "frenemies" brought the fight to the debate.

"There's a big question mark on your head, and you can't do it to the party," Trump said.

"I'll tell you, I'm not going to be taking legal advice from Donald Trump," Cruz said.

Trump has been bringing up Cruz's citizenship as an issue for some time.

Cruz was born in Canada to an American mother. (Video via CNN)

He maintains his citizenship is "settled law."

But don't worry, it looks like the love isn't completely lost.

"You very kindly offered me the VP slot. I'll tell you what, if this all works out, I'm happy naming you VP so if you're right, you'll get the top job at the end of the day," Cruz said.